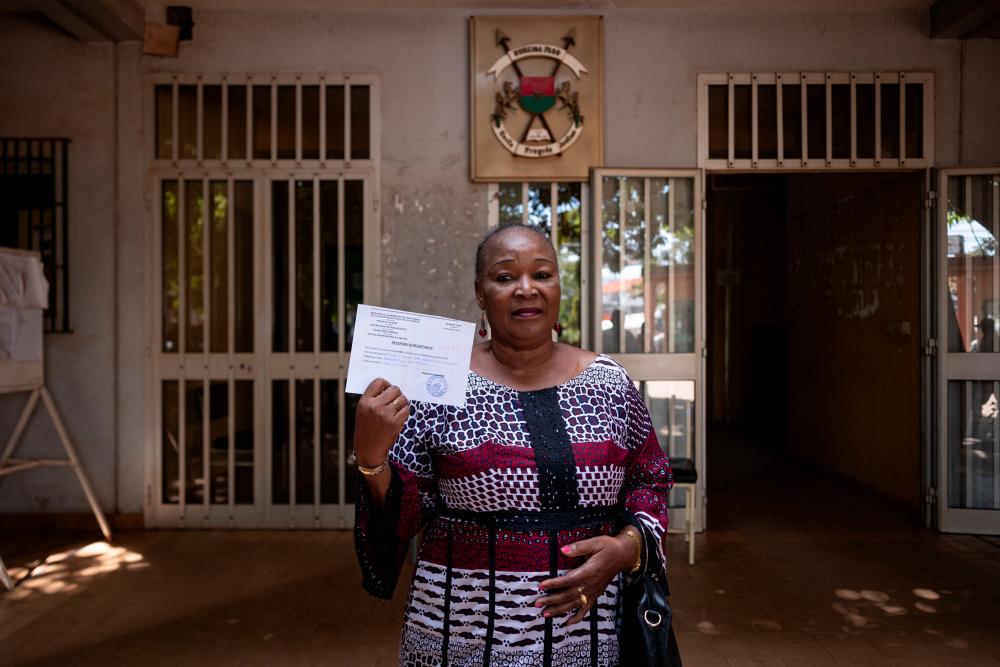 Edwige Nikiéma, a 60 year old housewife, poses with his receipt after enlisting as a Volunteers for the Defence of the Homeland (VDP), at the governorate of Ouagadougou, in Burkina Faso on November 18, 2022. - AFPPIX

OUAGADOUGOU: With flags, appeals to patriotism and reminders of its revered revolutionary leader, Burkina Faso has been calling for volunteers to join a battered civilian force fighting ruthless jihadis.

The authorities have been seeking 50,000 members for the Volunteers for the Defence of the Fatherland (VDP) -- an auxiliary force that supports the country’s poorly equipped army in its seven-year-old struggle against the insurgents.

At a gathering in the regional governor’s office in the capital Ouagadougou, the fervent tone was set by Alouna Traore -- a close aide to Burkina Faso’s firebrand former leader, Thomas Sankara, who 35 years after his assassination remains idolised today.

Traore, the only survivor of the attack that gunned down Sankara and his inner circle, made a dramatic entrance on a small motorbike with a Burkinabe flag perched on its petrol tank.

At the age of 65, he was offering his services to the VDP.

“The fatherland is in danger,“ he declared, a black scarf around his neck.

“It calls on all its sons to join its defence and the patriotic and popular mobilisation. Now is not the time to hesitate.”

“Like president Sankara, who loved the country so much that he gave it everything, including his life, the love of one’s country is an order for the sons of this country to sign up,“ he said. “It’s an appointment with history.”

One of the poorest and most volatile countries in the world, the landlocked Sahel state is struggling with a jihadist offensive launched from neighbouring Mali in 2015.

Thousands of soldiers, police officers and civilians have been killed, around two million people in a population of some 21 million have fled their homes and more than a third of the country is outside government control.

The crisis has unleashed two military coups this year, driven by army officers angered at failures to roll back the threat.

On November 1, at ceremonies to mark the 62nd anniversary of the armed forces, Defence Minister Kassoum Coulibaly said it was time to ditch the perception that fighting “terrorism” was restricted only to the armed forces.

“Every citizen should be aware that this is essentially a war in which our common destiny is at stake, meaning the survival of our nation,“ he said.

The three-week drive has brought in more than 30,000 VDP recruits, aged from 18 to 77 and of varying backgrounds, from students and the unemployed to traditional chiefs and even ministers.

“We’ve lost our land, lost too many friends,“ said Ablasse Kabore, a butcher who came with his son to sign up at the meeting in Ouagadougou.

“I want to cry when I talk about it. I am ready to die for my country.”

The minister of sport, youth and employment, Issouf Sirima, signed up in the southwestern town of Banfora.

“If you are in charge of a ministry that helps young people, and young people are being called on to enrol, you have to show the way,“ he said.

Idrissa Yameogo, a 24-year-old student who had come with two friends to join the VDP, said that “instead of asking foreign forces to come and help us, we should count on ourselves first and foremost”.

“We want to get good training and receive the means to fight the terrorists.”

The VDP, set up in December 2019, comprises civilian volunteers who are given two weeks’ military training and then work alongside the army, typically carrying out surveillance, information-gathering or escort duties.

But hundreds of these poorly-trained volunteers have died, especially in ambushes or explosions caused by improvised explosive devices (IEDs) planted along roadsides.

Zakaria Sore, a researcher at the Joseph Ki-Zerbo University in Ouagadougou, said the recruitment drive would help to deploy “fighting men around the country”.

But he also raised concerns about their lack of training and combat experience.

Abraham Badolo, head of a civilian NGO called the Alliance to Defend the Fatherland, said tens of thousands more guns would now be circulating in this deeply troubled country as a result of the recruitment drive.

But political analyst Drissa Traore said the emergency was now so great, the country had to focus on the present -- not on what might happen in the future.

Blaming the end of military service in the 1990s for the army’s decline, he said “there won’t be anything left of the country if it falls into the hands of our enemies... It’s the country’s very existence which is at stake”. - AFP