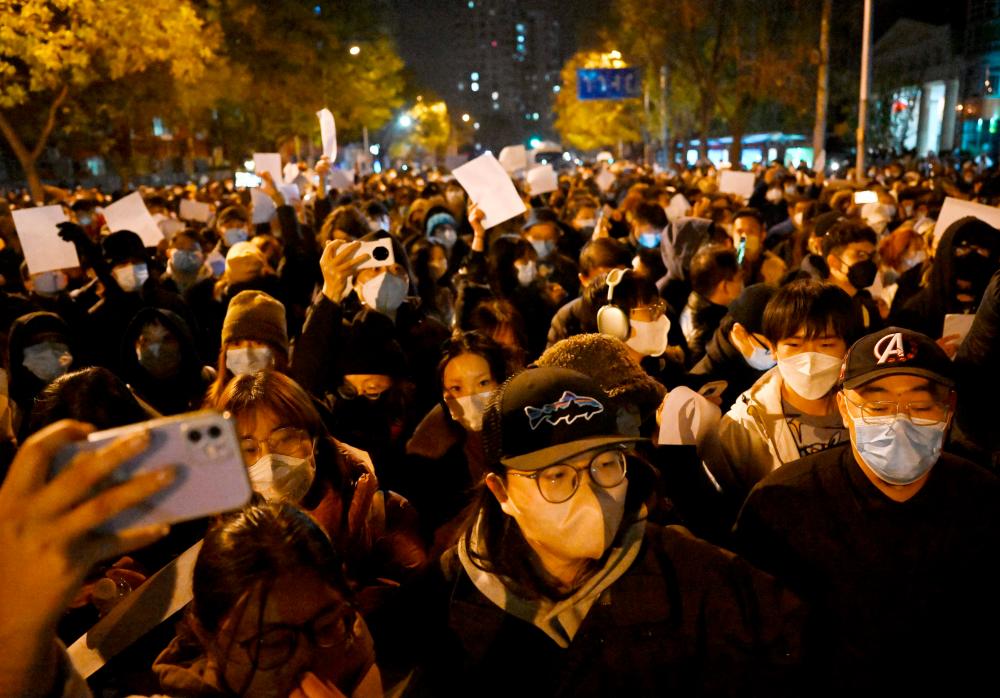 Protesters march along a street during a rally for the victims of a deadly fire as well as a protest against China’s harsh Covid-19 restrictions in Beijing on November 28, 2022. AFPPIX

SHANGHAI: Chinese security forces on Monday filled the streets of Beijing and Shanghai following online calls for another night of protests to demand political freedoms and an end to Covid lockdowns.

People have taken to the streets in major cities and gathered at university campuses across China in a wave of nationwide protests not seen since pro-democracy rallies in 1989 were crushed.

A deadly fire last week in Urumqi, the capital of northwest China's Xinjiang region, was the catalyst for public anger, with many blaming Covid-19 lockdowns for hampering rescue efforts.

Beijing has accused “forces with ulterior motives” of linking the fire to Covid measures.

At an area in the economic hub of Shanghai where demonstrators gathered at the weekend, AFP witnessed police leading three people away. China's online censorship machine also worked to scrub signs of the social media-driven rallies.

A planned protest in the capital Beijing later on Monday came to nothing as several dozen police officers and vans choked a crossroad near the assembly point in the western Haidian district.

Demonstrators had shared online a plan to march to the bridge following a successful rally the day before near the Liangma river.

In Hong Kong, where mass democracy protests erupted in 2019, dozens gathered at the Chinese University to mourn the victims of the Urumqi fire, an AFP journalist said.

“Don’t look away. Don’t forget. We are not foreign forces. We are Chinese youth,“ they shouted.

People also displayed banners and held flowers in the Central district of the financial hub, on which Beijing imposed a sweeping national security law after the 2019 protests.

And in Hangzhou, just over 170 kilometres (106 miles) southwest of Shanghai, there was strict security and sporadic protests in the city's downtown, footage circulating on social media and partly geolocated by AFP showed.

Protesters have notably used the rallies to call for greater freedoms, with some even demanding the resignation of President Xi, recently re-appointed to a historic third term as China's leader.

Large crowds gathered Sunday in Beijing and Shanghai, where police clashed with demonstrators as they tried to stop groups from converging at Wulumuqi street, named after the Mandarin for Urumqi.

The BBC said one of its journalists had been arrested and beaten by police while covering the Shanghai protests, although China's foreign ministry insisted the reporter had not identified himself as such.

In Washington, the White House said President Joe Biden is monitoring the unrest closely. National Security Council spokesman John Kirby would not describe Biden's reaction to the protesters' demands but said the president supported their rights.

“People should be allowed the right to assemble and to peacefully protest policies or laws or dictates that they take issue with,“ Kirby said.

British Prime Minister Rishi Sunak warned that China posed a “systemic challenge” to UK values and interests, as his government condemned the reported beating of the BBC reporter.

Sunak said the so-called “golden era” of UK-China relations trumpeted by former prime minister David Cameron was “over, along with the naive idea that trade would automatically lead to social and political reform.”

He said Britain would thus “need to evolve our approach to China.”

In Beijing on Monday, where at least 400 people gathered for several hours the previous night, a repeat rally did not take place, an AFP journalist said.

One protester told AFP that she and five of her friends who attended the protest received phone calls from Beijing police demanding information about their movements Monday evening.

In one case, she said, a police officer visited her friend's home after they refused to answer their phone.

“He said my name and asked me whether I went to the Liangma river last night... he asked very specifically how many people were there, what time I went, how I heard about it,“ she told AFP, asking to stay anonymous for safety reasons.

AFP journalists at the tense scene of the Shanghai protests on Monday also saw a heavy police presence, with temporary blue fences in place along the pavements to stop further gatherings.

Three people were then detained by police at the site, an AFP journalist saw, with law enforcement preventing passersby from taking photos or video of the area.

Shanghai police did not confirm to AFP how many people had been detained despite repeated enquiries.

An AFP journalist also filmed people being detained on Sunday.

China's strict control of information and continued travel curbs tied to the zero-Covid policy make verifying the numbers of protesters across the vast country challenging.

But such widespread rallies are exceptionally rare, with authorities harshly clamping down on all opposition to the central government.

At the scene of the Beijing riverside rally, where rows of police vehicles were in place on Monday, a jogger in her twenties told AFP she had seen the protests on social media and that she supported them.

“This protest was a good thing, it sent the signal that people were fed up with too strong restrictions,“ said the jogger, who asked not to be identified. - AFP