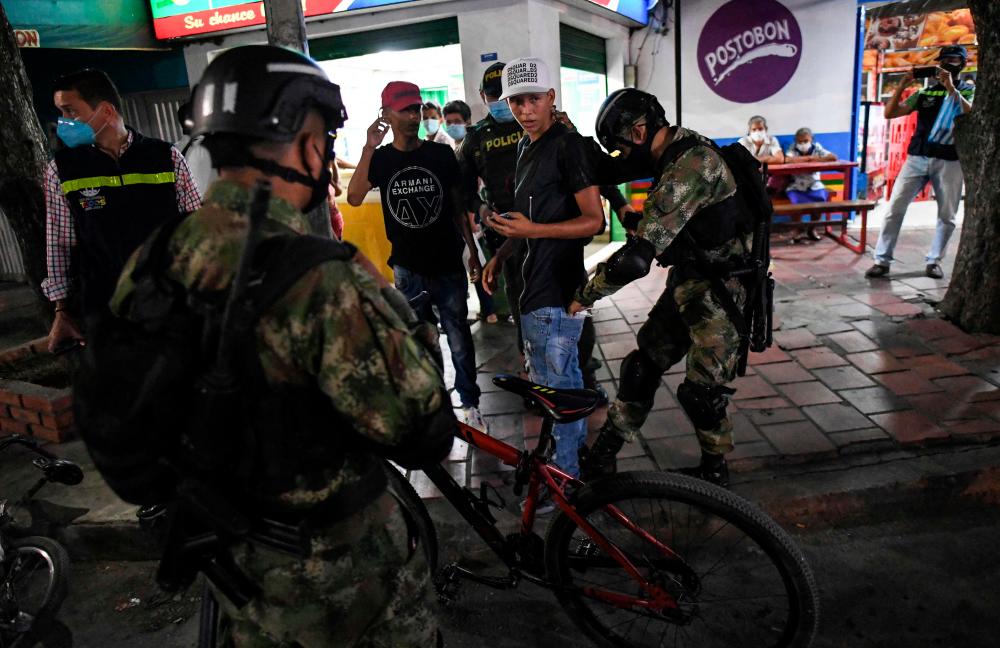 A Colombian soldier frisks a local at a checkpoint in Cuberos Nino neighbourhood in Cucuta, in the Colombia-Venezuela border on October 5, 2021. AFPPIX

BOGOTA: Colombia is to deploy 400 soldiers to fight drug traffickers operating across its rural southern borders, after a recent spike in killings and internal displacement, the South American country's government said Monday.

There will be six sectors along Colombia’s borders with Ecuador, Peru and Brazil, “with 400 soldiers and officers who will be on the front line of operations... to block the drug trafficking corridors,“ Interior Minister Alfonso Prada told reporters after a security cabinet meeting.

President Gustavo Petro, the country's first left-wing president, had called the meeting with senior military officers after recent fighting between armed groups left 18 dead and displaced a dozen families in the southwestern region of Putumayo, bordering Ecuador and Peru.

Those clashes pitted a dissident faction of the FARC guerrillas -- the “Carolina Ramirez” front -- against another armed group, the “Comandos de la Frontera.”

The “Carolina Ramirez” front belongs to the largest faction that withdrew from the peace pact that disarmed the FARC in 2017, according to local media.

According to the government, these two groups are fighting for control of drug trafficking routes in the forests between Colombia and Ecuador.

“We have contacted neighboring countries because we have seen an activity that we are going to fight with our army, but also with international cooperation”, said Prada.

He specified that the Colombian government had also spoken with authorities in Panama and Venezuela, where the powerful Colombian drug cartel, the Gulf Cartel, and the Colombian guerrillas of the rebel National Liberation Army (ELN) operate respectively.

The ELN, considered the last active guerrilla movement in the country, resumed peace talks with the Petro government in Caracas on November 21.

During his inaugural speech in August, Petro declared that it was “time to have a new international convention which accepts that the war against drugs has failed,“ and to favor a “strong policy of prevention of consumption” in developed countries. - AFP