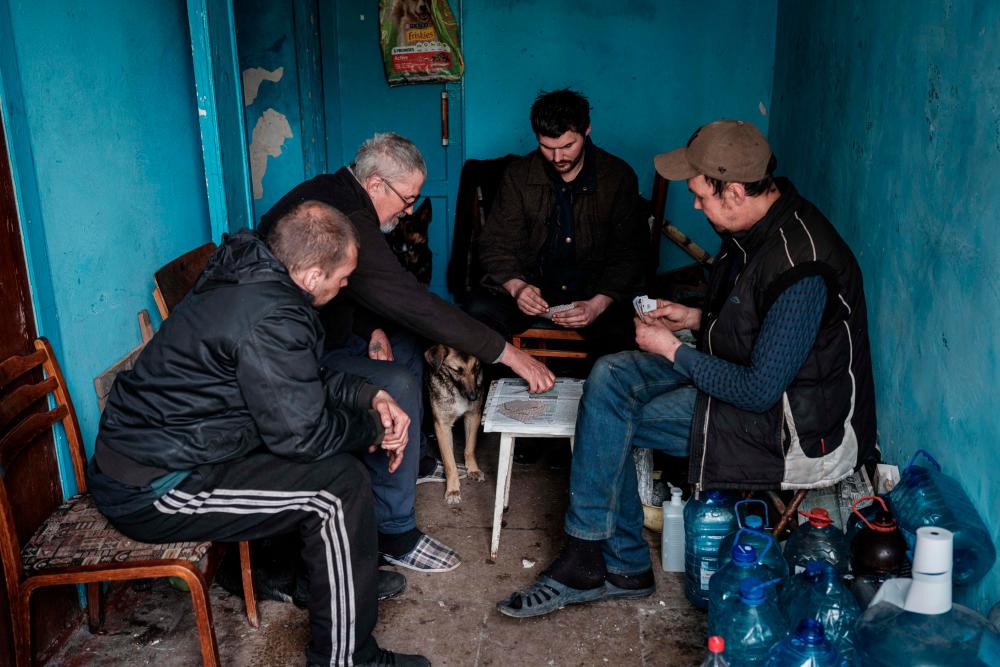 Internally displaced men play cards at the entrance of a bunker under the destroyed building of the Palace of culture in Rubizhne, eastern Ukraine, on April 23, 2022. AFPPIX

RUBIZHNE: Mikhailo, who has lost everything to the war, except perhaps his sense of humour, draws on a cigarette before only half-joking, “You cannot die twice.”

He has survived the Russian onslaught under the ruins of Rubizhne, on the frontline of the battling raging for control on eastern Ukraine.

Kremina, the next town along the Donbas frontline, fell to Russian forces five days ago.

Rubizhne hangs by a thread with the launch of a major Russian offensive to conquer the region.

After a month of bombardment, the Russians have taken hold of the northern part of the town. Most of the south remained under Ukrainian control on Saturday.

The Ukrainian artillery is for now managing to keep the invaders at bay, halting their progress.

Columns of smoke rise above the chimney stack of the town's biggest chemical works when the big guns fire. A row of tower blocks deserted by their worker families, disappear behind the smoke.

Rubizhne, which had a population of 60,000 before the war, is reached via a series of checkpoints manned by soldiers. “Kozak” armoured vehicles are given priority as they drive through to reinforce the front.

The town has been smashed. Every building, with no exception, bears witness to the fighting. Not a single window has resisted the deluge of fire from both sides.

The cratered streets are fields of debris.

The apartment blocks are either damaged, burnt or totally gutted. Roofs have been ripped off, facades have collapsed like doll's houses.

'I want my house'

The last people to have stayed on, are as in every other frontline town, the most vulnerable.

Close to the sole roundabout in southern Rubizhne, a dozen locals are living in a cramped cellar to protect themselves from the carpet of bombs.

Mikhailo has walked to the shelter. At the entrance a group of men, some seated others standing, pass round a single cigarette, leaving a wood fire to burn out.

The staircase opens on to a maze of dark rooms. An oil wick lights an alcove.

Next to the flickering flame, a radio spits out the Status Quo hit song “You’re in the army now”, an anthem for all young conscripts the world over.

In the adjacent room, a candle lights the faces of six elderly men stretched out on camp beds.

“My mother will be 90 in August. I can’t carry her myself and take her to a car.

“Let all those who started this war come down to our basement to hold negotiations. Let them listen to the bombardments and sit in candlelight.

“Then they will finally take a decision,“ says Lyudmila, trying to calm her mother.

“I want my house,“ pipes up the mother, wrapped up in a cover like a mummy.

The old lady refuses to climb the shelter’s stairs, “too scared”, she says.

Sleepless nights in the cellar have brought back World War II nightmares and memories of hunger.

The town's grand Culture Palace bears witness to a rich history but it has been pounded by artillery and only the facade still stands.

Inside, the ancient cinema auditorium is in shreds. The folding seats have collapsed like dominos.

In the entrance, the huge chandelier is in smithereens on the red carpet.

Stage costumes for children still hang in wardrobes that have been overturned.

There are no windows left in the piano room which is covered in broken plaster.

Retired engineer Yuri Fomine, wanders through the empty corridors of the ruined palace, holding a Polish novel and a pen.

“Every day when I was a kid I used to go either to the cinema or the library to take out a book,“ he recalls.

“It was such a happy childhood, there’s so much nostalgia... I was not prepared mentally for this war.

“I have the impression that everything is unreal, that we are living in a parallel dimension, but actually we are living in the reality produced by the sick mind of the president of the Russian Federation,“ says the 62-year-old.

As so often in this region torn by separatist fighting, Mikhailo says “it doesn’t matter who wins, the war has to stop very soon”.

And what will he say to the first Russian soldier he meets afterwards? “Hello, do you have a cigarette,“ he replies smiling at his own joke. - AFP