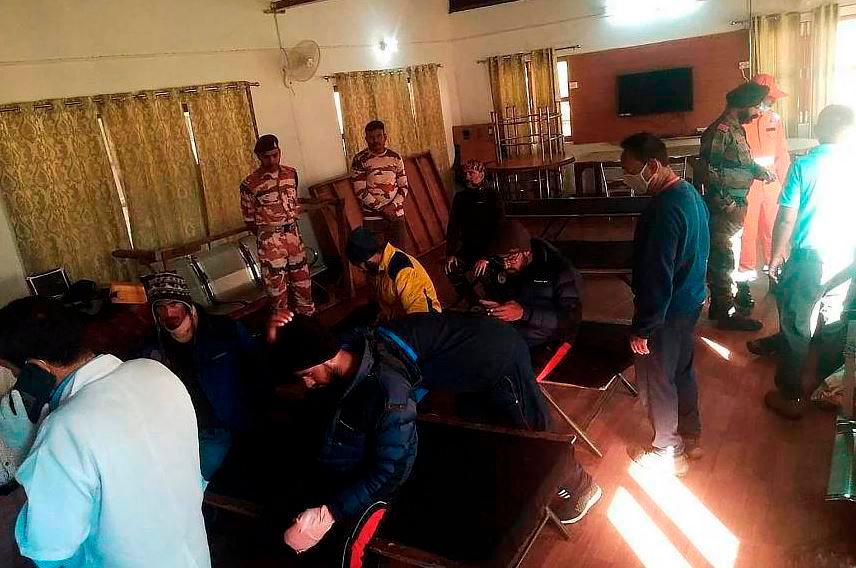 Evacuees receiving first aid during a rescue operation for the missing climbers that were hit by the avalanche, in Uttarakhand, India, on Oct 5, 2022. AFPPIX

NEW DELHI: At least 19 people have been confirmed dead after an avalanche struck climbers in the Indian Himalayas, authorities said Friday, with bad weather hampering the fourth day of search and rescue efforts.

A group of climbing trainees and instructors were caught in Tuesday's massive snowslide near the summit of Mount Draupadi ka Danda II in the northern state of Uttarakhand.

“Rescue operations have resumed for the day but are subject to weather,“ she added. “The weather is bad.”

Police, disaster authorities and the Indian air force have been mobilised to help with search efforts, with 32 people rescued from the mountain despite snow and rainfall.

A helicopter landing ground had been prepared near the site of the avalanche at 4,900 metres (16,000 feet) above sea level, the Indo-Tibetan Border Police said Thursday.

Survivor Naib Subedar Anil Kumar told the Indian Express that he and some of his fellow climbers had been pulled into a crevasse when the avalanche hit their ropes.

“When the snow began to settle, I undid the ropes and started to rescue my teammates,“ he told the newspaper. “However, there was little we could do.”

Sunil Lalwani, one of the rescued trainee climbers, credited the instructors for saving many lives.

“We were 50-100 metres from the summit with our instructors ahead of us, when suddenly an avalanche hit us and took everyone down,“ Lalwani was quoted as saying by the Hindustan Times on Thursday.

“It happened in a matter of seconds,“ he added. “We were somehow able to breathe... It’s because of them that we are alive today.”

Among the bodies recovered earlier in the week was that of climber Savita Kanswal, who had summited Everest this year.

Kanswal was an instructor with the expedition and had been feted by the climbing community for summiting the world's highest peak and nearby Makalu in just 16 days -- a women's record.

Fatal climbing accidents are common in the Himalayas, home to Everest and several of the world's highest peaks.

In August, the body of a mountaineer was recovered two months after he fell into a crevasse while crossing a glacier in the northern state of Himachal Pradesh.

Last week, renowned US ski mountaineer Hilaree Nelson's body was found on the slopes of Nepal's Manaslu peak after she went missing skiing down the world's eighth-highest mountain.

The same day, Nepali climber Anup Rai was killed and a dozen others were injured after an avalanche on the 8,163-metre (26,781-foot) mountain.

Although no substantial research has been done on the impacts of climate change on mountaineering risks in the Himalayas, climbers have reported crevasses widening, running water on previously snowy slopes, and the increasing formation of glacial lakes. - AFP