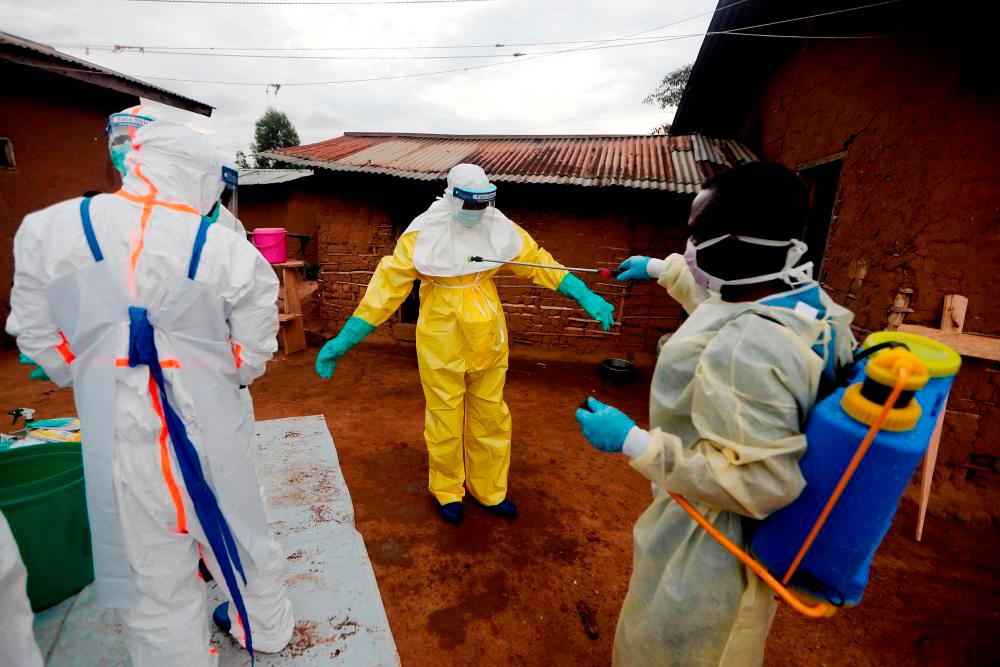 FILE PHOTO: Kavota Mugisha Robert, a healthcare worker, who volunteered in the Ebola response, decontaminates his colleague after he entered the house of 85-year-old woman, suspected of dying of Ebola, in the eastern Congolese town of Beni in the Democratic Republic of Congo, October 8, 2019. - REUTERSPIX

KAMPALA: A total of four people have died from the highly contagious Ebola virus in Uganda, where the authorities declared an outbreak earlier this week, health officials said on Friday.

“Three new deaths were recorded,“ the health ministry said in a statement, raising the toll from one to four after the country’s first fatality from the virus since 2019 was reported on Tuesday.

The total number of confirmed cases now stood at 11 after four more infections were confirmed in the last 24 hours, the officials said.

It was not immediately clear if the 11 cases included the four fatalities.

“The Ministry of Health Rapid Response Teams remain on ground to list and follow up contacts to the confirmed cases,“ it said, urging increased vigilance.

Authorities declared an outbreak in the central district of Mubende on Tuesday, announcing the death of a 24-year-old man.

Uganda, which shares a porous border with the Democratic Republic of Congo (DRC), has experienced several Ebola outbreaks, most recently in 2019 when at least five people died.

The DRC last month recorded a new case in its violence-wracked east, less than six weeks after an epidemic in the country's northwest was declared over.

Ebola is an often fatal viral haemorrhagic fever. The death rate is typically high, ranging up to 90 percent in some outbreaks, according to the World Health Organization.-AFP