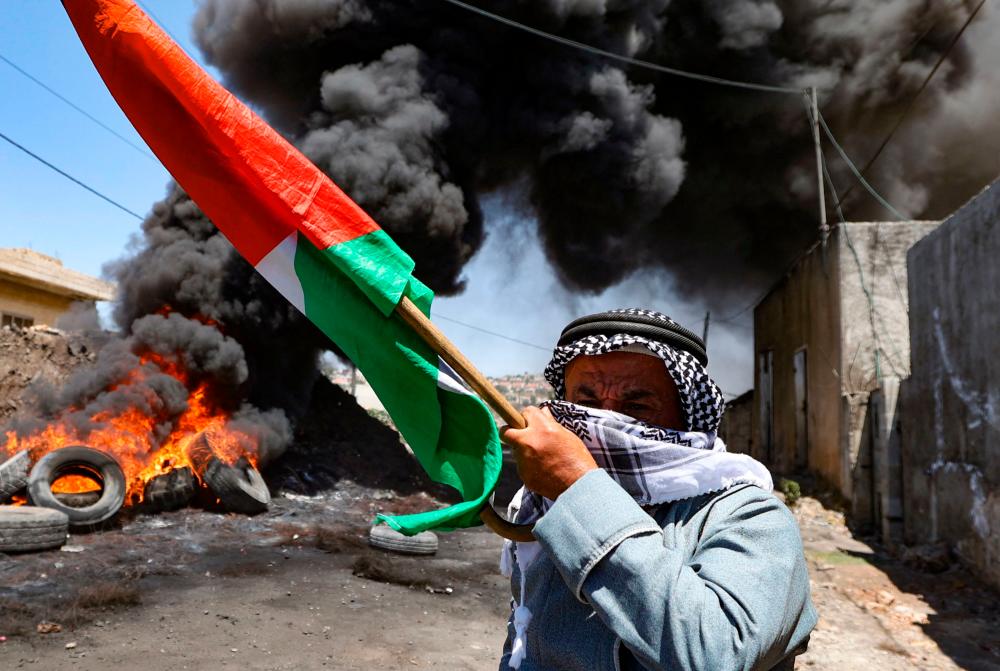 An elderly Palestinian man holds a national flag during clashes with Israeli forces following a demonstration against the expropriation of Palestinian land by Israel, in the village of Kfar Qaddum near the Jewish settlement of Kedumim in the occupied West Bank, on July 1, 2022. AFPPIX

RAMALLAH: A 68-year-old female Palestinian prisoner died Saturday morning in an Israeli prison, with the exact reason unknown, Xinhua quoted the Palestinian Prisoners Club Association as saying in a statement.

Sa’deya Farajallah, mother of eight from the southern West Bank city of Hebron, died in the Israeli prison of Damon in northern Israel, the Palestinian non-governmental organisation said, adding that she was the oldest female prisoner in an Israeli prison.

Farajallah was arrested near the Ibrahimi Mosque in the centre of Hebron after she tried to stab Israeli soldiers in December 2021.

The exact cause of her death remains unknown, with the Israeli authorities giving no official comment on the incident.

The Israel Prison Service said Farajallah, who was suffering from a chronic illness and receiving regular treatment, was returned this week from hospital to the prison. An investigation has been opened into the circumstances of her death.

Tayseer Farajallah, Sa’deya’s brother, told Xinhua that his sister did not suffer from any diseases in the past and that “the prison subjected Sa’deya to torture” and left her “without providing necessary treatment.”

He said “family members could not visit her during her detention under false pretexts,“ accusing the Israeli authorities of being “fully responsible” for her death and demanding an autopsy to uncover the leading cause of her death.

The death of Farajallah brings the number of Palestinian prisoners who have died in Israeli prisons since 1967 to 230, the official Palestinian news agency WAFA has reported.

According to the Commission of Detainees and Ex-Detainees Affairs in Palestine Liberation Organisation, about 500 sick prisoners are in Israeli prisons, with about 50 complex cases needing special care. - Bernama