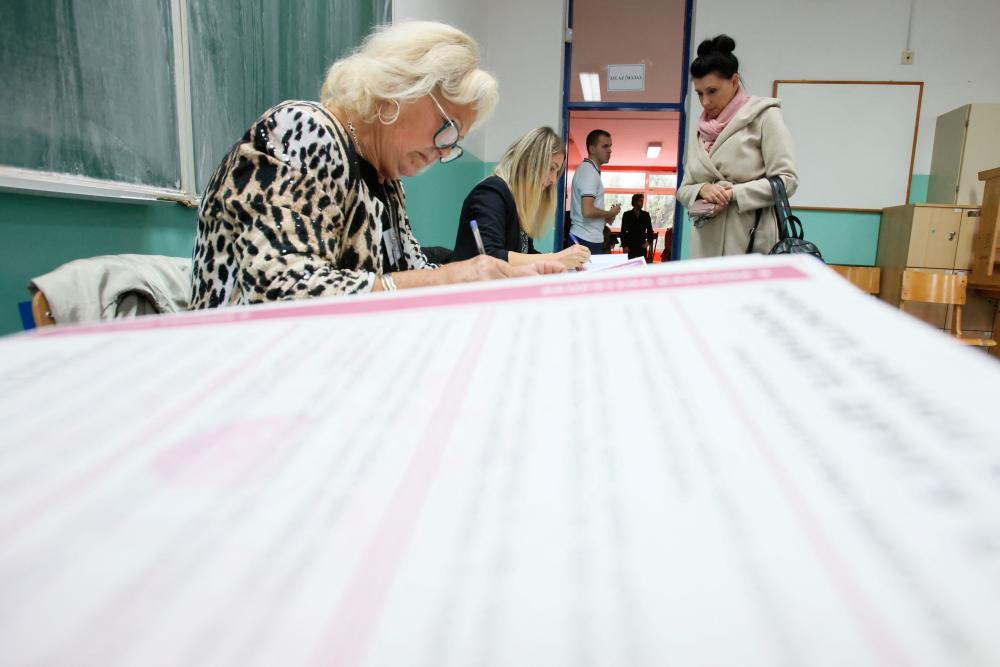 A woman waits to vote during presidential and parliamentary elections at a polling centre in a school in Sarajevo, Bosnia and Herzegovina October 2, 2022. - REUTERSPIX

SARAJEVO: Bosnians voted in general elections on Sunday, following a campaign marked by threats of secession, political infighting, and fears of future turmoil as ethnic tensions in the country grow.

Voters are casting ballots in a dizzying number of contests, including for the three members of Bosnia’s tripartite presidency, the deputies of the central parliament and a string of local races.

Nearly three decades after war ravaged the Balkan country, Bosnia continues to be burdened by its ethnic divisions.

The Balkan state has been governed by a dysfunctional administrative system created by the 1995 Dayton Agreement that succeeded in ending the conflict in the 1990s, but largely failed in providing a framework for the country’s political development.

Bosnia remains partitioned between a Serb entity -- the Republika Srpska (RS) -- and a Muslim-Croat federation connected by a weak central government.

In the war’s wake, ethnic political parties have long exploited the country’s divisions in a bid to maintain power.

“I hope for nothing. I vote because that is the only thing I can do as an individual,“ said Amra Besic, a 57-year-old economist, after voting.

In the run-up to Sunday’s vote, the country has been torn between secessionist Orthodox Serbs and Catholic Croats demanding greater autonomy and electoral reforms.

The country’s Muslim Bosniaks will also face a choice of voting for a disparate, 11-party coalition that is trying to unseat the rule of the mainstream SDA.

The SDA is led by Bakir Izetbegovic -- the son of the first president of independent Bosnia -- and has largely dominated the political scene in the country for decades.

After casting a ballot at a polling station in downtown Sarajevo, Izetbegovic called on Bosnians to vote for politicians “who will not create blockades and crises, who will not chase away the youth from Bosnia-Herzegovina”.

Ahead of the polls, many voters said the lack of young candidates offering fresh ideas has left them largely uninspired.

“Most of the candidates that are running are the ones we have been watching for the last twenty years,“ said Sara Djogic, a 21-year-old philosophy student in the capital Sarajevo.

“There are not many who offer something new,“ she added.

With little to no polling data available, analysts say incumbents and nationalist parties that have dominated the post-war political scene are likely to win many of the races.

The leader of Bosnia’s Serbs, Milorad Dodik, is seeking his third term as the president of the RS, after completing a stint in the tripartite presidency.

For the past year, Dodik has been stoking tensions with his frequent calls for Bosnia’s Serbs to separate even further from the country’s central institutions, earning him fresh sanctions from the US in January.

“People are motivated to vote for stability, for peace, for a safe life in this region,“ said Dodik after voting in his home village of Laktasi in the RS.

Dodik’s primary challenger Jelena Trivic has vowed to crack down on corruption in the RS if elected.

“Our revenge will be the law,“ Trivic said before the vote.

For the country’s Catholic Croats, political turmoil has also been brewing.

Ahead of the election, many Croats have been demanding electoral reforms with the leading nationalist party HDZ threatening to boycott the contest.

Their grievances are steeped in the vast numerical advantage held by Bosniaks in the Muslim-Croat federation, which has allowed Muslim voters to hold de facto control over who can be elected to lead the Croats at the presidential level.

HDZ and other Croat parties have been calling for the creation of a new mechanism to allow the community to choose their own representatives to the presidency and upper house.

The move, however, has been fiercely opposed by the federation’s ruling Bosniak party.

With threats of fresh boycotts, fears are growing of potential turmoil after the polls if the incumbent Croat co-president Zeljko Komsic -- who is widely reviled by all Croat parties that view him as a Bosniak proxy -- is re-elected.

The ever-present threats and vitriol has led some to skip the polling booth Sunday.

“I do not expect anything new after these elections. Everything will be the same,“ said Mira Sladojevic, a pensioner in her seventies in Sarajevo.

“I haven’t voted for a long time,“ she added.

The first wave of preliminary results is expected several hours after the polls close at 7:00 pm (17:00 GMT). - AFP