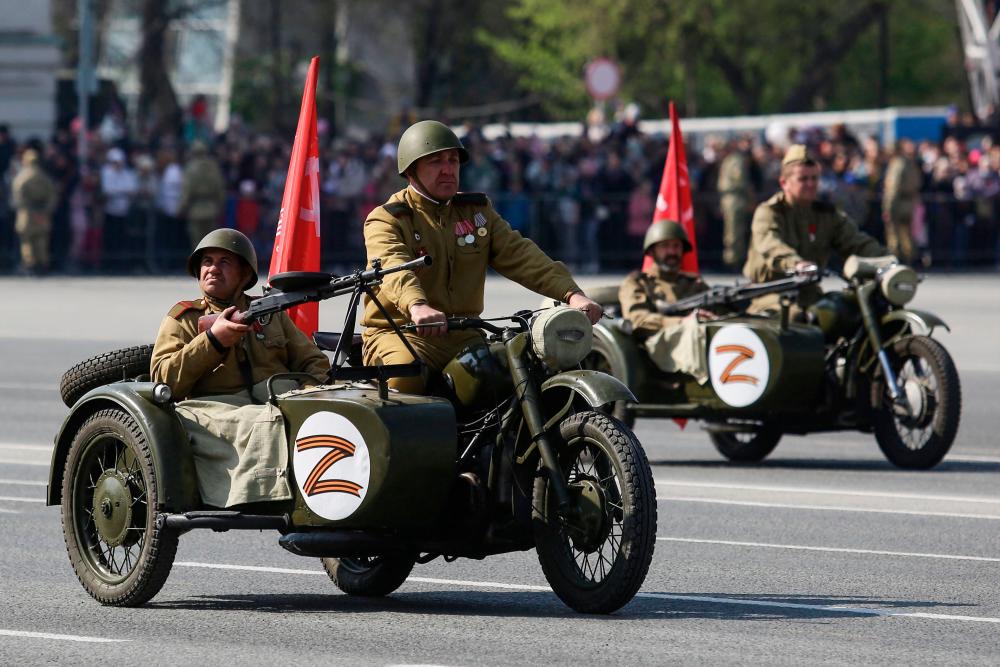 File pix: Participants wearing historical uniforms ride in WWII-era motorcycles adorned with stickers of the letter Z, which has become a symbol of support for Russian military action in Ukraine, during a military parade, which marks the 77th anniversary of the Soviet victory over Nazi Germany in World War Two, in Novosibirsk on May 9, 2022. AFPPIX

BRANDENBURG AN DEL HAVEL: A 101-year-old former Nazi concentration camp guard today once again denied being complicit in war crimes during the Holocaust as his trial drew to a close in Germany.

Josef Schuetz, the oldest person so far to face trial over Nazi crimes during World War II, is accused of involvement in the murders of 3,518 prisoners at the Sachsenhausen camp in Oranienburg, north of Berlin, between 1942 and 1945.

The pensioner, who now lives in Brandenburg state, has pleaded innocent throughout the trial, saying he did “absolutely nothing” and was not aware of the gruesome crimes being carried out at the camp.

“I don’t know why I am here,” he said again at the close of the proceedings, his voice wavering.

Dressed in a grey shirt and pyjama bottoms and sitting in a wheelchair, Schuetz insisted he had nothing to do with the atrocities and was “telling the truth”.

Prosecutors say he “knowingly and willingly” participated in the crimes as a guard at the camp and are seeking to punish him with five years behind bars.

But Schuetz’s lawyer, Stefan Waterkamp, said that since there were no photographs of him wearing an SS uniform, the case was based on “hints” of his possible involvement.

“As early as 1973, investigators had information about him but did not pursue him. At the time, witnesses could have been heard but now they are all dead or no longer able to speak,” Waterkamp said.

It would be a mistake for the court to try to “make up for the mistakes of a previous generation of judges”, the lawyer said.

Antoine Grumbach, 80, whose father died in Sachsenhausen, told AFP Schuetz “does not want to remember”, calling it “a form of defence”.

The trial was not just about “putting a centenarian in prison”, he said. It had also produced evidence that Sachsenhausen was an “experimental extermination camp”.

“All the cruellest methods were invented there and then exported,” Grumbach said.

The verdict is expected tomorrow. — AFP