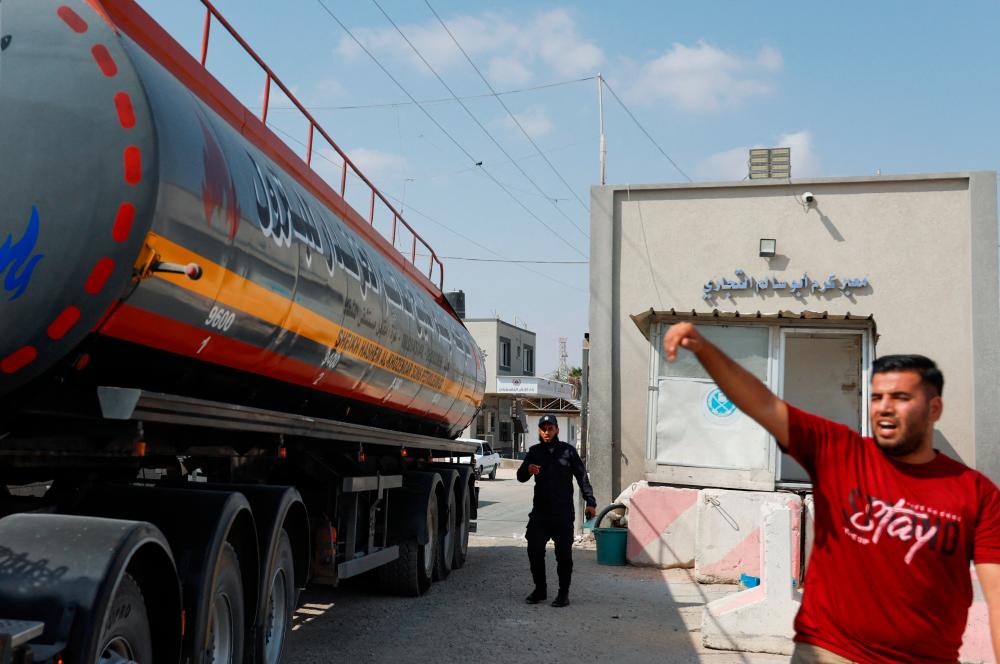 A truck carrying fuel imports for the lone power plant rolls into Gaza, after Israel eased up closures, as ceasefire holds in Rafah in the southern Gaza Strip, August 8, 2022. REUTERSPIX

An AFP journalist at the goods crossing to southern Gaza saw trucks loaded with fuel enter the enclave, ending a severe shortage which had prompted the only power station there to shut down Saturday.

The arrival of vital supplies follows the start of a ceasefire late Sunday to stem the worst fighting in Gaza since an 11-day war last year devastated the Palestinian coastal territory.

Despite a flurry of strikes and rocket attacks in the run-up to the truce, neither side had reported any major violations of the agreement overnight.

The Israeli military said roads would gradually reopen in the border area on Monday.

“It was decided to gradually lift the restrictions,“ which have seen Israelis living near Gaza remain close to their bomb shelters, the army said.

US President Joe Biden welcomed the ceasefire and thanked Egyptian President Abdel Fattah al-Sisi for his country's role in brokering it.

Israeli Prime Minister Yair Lapid’s office late Sunday thanked “Egypt for its efforts” as it agreed to the truce, but said that “if the ceasefire is violated”, Israel “maintains the right to respond strongly”.

Islamic Jihad, an Iran-backed group designated as a terrorist organisation by several Western nations, also accepted the truce but said it too “reserves the right to respond” to any aggression.

Tehran said it will always “defend the active resistance”.

“A ceasefire was established because the Zionists (Israel) only understand the language of power,“ Iranian Foreign Minister Hossein Amir-Abdollahian wrote on Instagram.

Starting on Friday, Israel had launched a heavy aerial and artillery bombardment of Islamic Jihad positions in Gaza, leading the militants to fire hundreds of rockets in retaliation.

In addition to those killed, Gazan health officials said 360 people had been wounded in the Palestinian enclave, which is run by the Islamist group Hamas.

A senior Israeli diplomatic official said Monday that “most of the civilians that were killed in Gaza were killed by Islamic Jihad rockets” that fell short or misfired.

The militant group on Monday said 12 of its leaders and members had been killed.

Three people in Israel were wounded by shrapnel, while 31 others were lightly hurt while running for safety, emergency services said.

They were named as Bassem al-Saadi, a senior figure in the group's political wing who was recently arrested in the occupied West Bank, and Khalil Awawdeh, a militant also in Israeli detention.

Across areas hit in Gaza, Palestinians tried to salvage belongings from the rubble and remove debris.

Mohammed Alai, who lives east of Gaza City, said the situation was “tragic and tough”.

“We have a lot of martyrs and wounded, and devastation and destruction, but Gaza is tending to its wounds,“ he said.

In the Israeli city of Asheklon, north of Gaza, beachgoers returned to the shore.

“After we destroy them we can sleep peacefully,“ he told AFP. “I don’t think Jihad will do anything again in the next three or four years.”

Islamic Jihad is aligned with Hamas but often acts independently. Hamas has fought four wars with Israel since seizing control of Gaza in 2007, including the conflict in May last year.

Israel has said it was necessary to launch a “pre-emptive” operation against Islamic Jihad, while the diplomatic official said the group had been planning an attack by sniper fire or with anti-tank missiles.

The army has killed senior leaders of Islamic Jihad in Gaza, including Taysir al-Jabari and Khaled Mansour.

The senior Israeli diplomatic official said Islamic Jihad had been dealt “a very serious blow” which had “taken them back decades”. - AFP