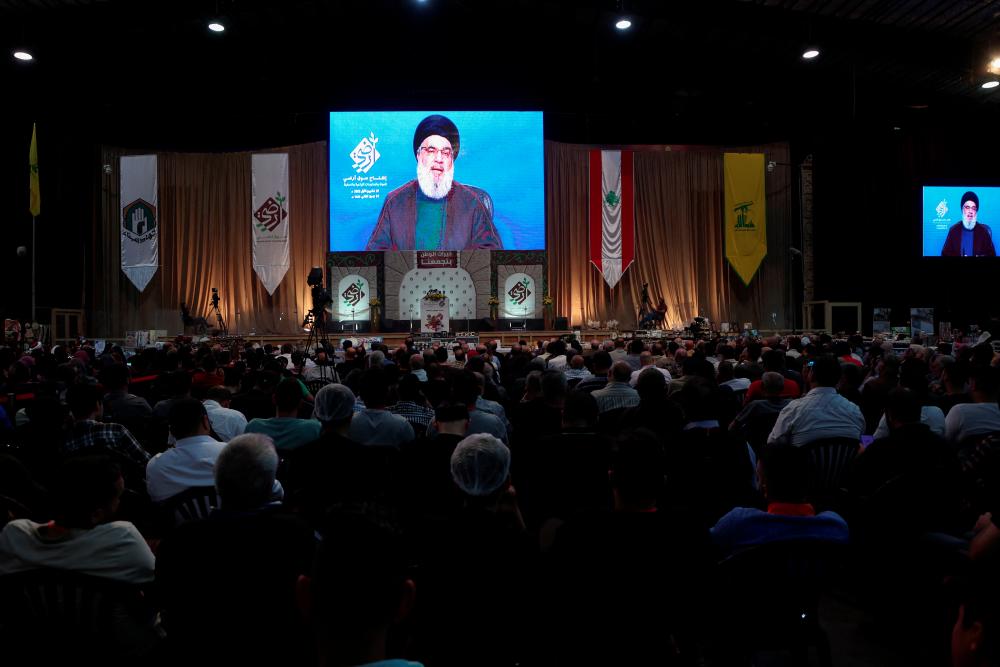 Lebanon's Hezbollah leader Sayyed Hassan Nasrallah addresses his supporters through a screen during the opening of a local exhibition, in Beirut's southern suburbs, Lebanon October 27, 2022. - REUTERSPIX

BEIRUT: Lebanese armed group Hezbollah will end an “exceptional” mobilisation against Israel after threatening to attack for months, its leader Hassan Nasrallah said Thursday after Lebanon and Israel struck a maritime border deal.

“All the exceptional and special measures and mobilisation carried out by the resistance for several months are now declared over,“ Nasrallah said in a televised speech, calling the agreement a “great victory for Lebanon”.

“Our mission is complete,“ Nasrallah said, adding that the deal “is not an international treaty and it is not a recognition of Israel”.

On July 2, Israel said it had downed three drones launched by Hezbollah that were headed towards the border offshore field of Karish which was partly claimed by Lebanon.

Nasrallah had warned Israel against reaching for the reserves before a deal was finalised.

The agreement between the countries, which are still technically at war, was applauded by world leaders including US President Joe Biden.

It was signed separately on Thursday by Lebanon’s President Michel Aoun in Beirut and by Israel’s Prime Minister Yair Lapid in Jerusalem, and went into effect after the papers were delivered to mediators.

Earlier in the day Lapid had claimed that the deal meant Lebanon de facto “recognises the State of Israel, in a written agreement”.

Aoun had retorted that the deal had no “political implications”.

The United States-mediated deal is set to unlock potential off-shore gas resources for Lebanon, at a time when the country is reeling from three years of gruelling economic crisis.

It also streamlines gas production for Israel, as Lebanon’s Iran-backed Hezbollah had threatened the Jewish state with attacks should it begin work in the disputed area before a deal was signed. - AFP