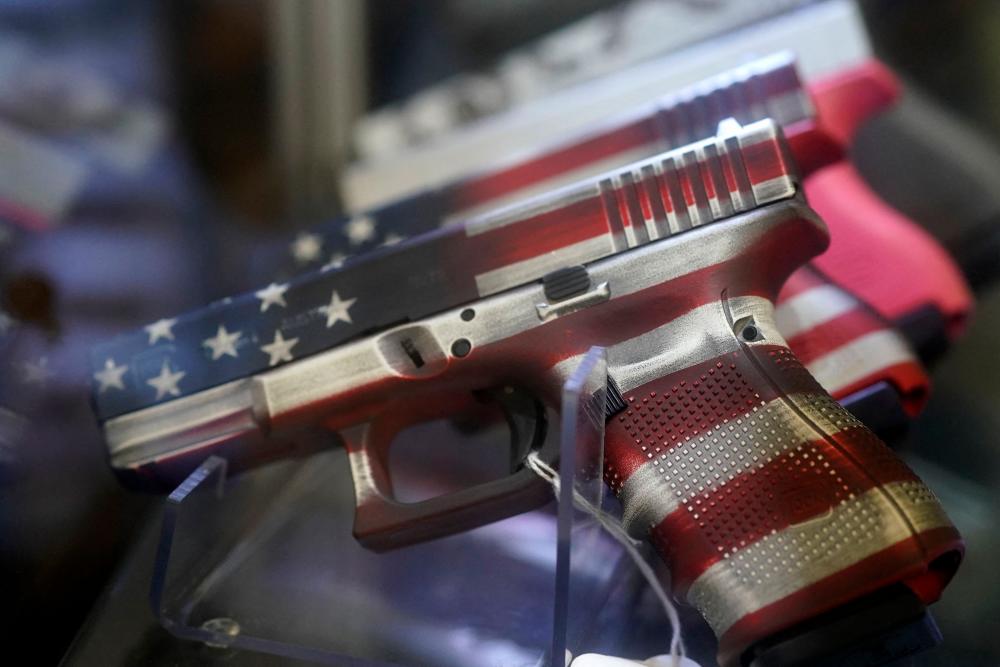 (FILES) In this file photo taken on October 01, 2020 a display of guns for sale is seen at Coliseum Gun Traders Ltd. in Uniondale, New York. AFPPIX

WASHINGTON: US firearms makers produced over 139 million guns for the commercial market over the two decades from 2000, including 11.3 million in 2020 alone, according to a new government report.

Another 71 million firearms were imported in the same period -- compared to just 7.5 million exported -- underscoring how the country is literally swimming in personal weapons that have stoked a surge in gun violence, murders and suicides, according to the Justice Department report.

The report shows that while Americans have made favorites of semi-automatic assault rifles seen in many mass shootings, they have bought en masse the increasingly cheap, easy-to-use and accurate semi-automatic 9 mm pistols like those that most police now use.

And, the report shows, authorities face a surge in unregistered “ghost guns“ made at home with parts that can be bought online and produced with 3-D printer, and pistols and short-barrelled rifles that are as powerful and lethal as the semi-automatic assault rifles used in mass shootings.

“We can only address the current rise in violence if we have the best available information and use the most effective tools and research to fuel our efforts,“ said Deputy Attorney General Lisa Monaco.

“This report is an important step in that direction. The Department will continue to gather the data necessary to tailor our approach at the most significant drivers of gun violence and take shooters off the streets.”

The report came out after a shocking weekend showed how the vast surplus of guns has made its mark on US society.

In Buffalo, New York an 18-year-old white man driven by racist hate used an assault rifle to murder 10 African Americans; in Laguna Woods, California a man shot five people in a church frequented by Taiwanese with a 9 mm pistol; and in Milwaukee, Wisconsin, more than 20 people were wounded in shootings in one evening in the downtown entertainment district.

Last week the Centers for Disease Control and Prevention said the number of gun deaths in the United States underwent an “historic“ increase in 2020.

The CDC said the rise might be blamed in part by the stresses of the Covid-19 pandemic and poverty.

Of those sold in 2020, almost exactly half were pistols, doubling their share of the market since 2000: the year 2020 saw 5.5 million pistols, and nearly a million revolvers, enter circulation.

Firearms made by official manufacturers must have serial numbers that allow them to be traced by law enforcement.

In April President Joe Biden announced a crackdown on ghost guns, pushing back at pro-gun advocates who called his ideas “extreme”.

The new report was the first in a four-volume study of gun markets and illegal trafficking. - AFP