Immigrant charged with 7 murders in Half Moon Bay shooting 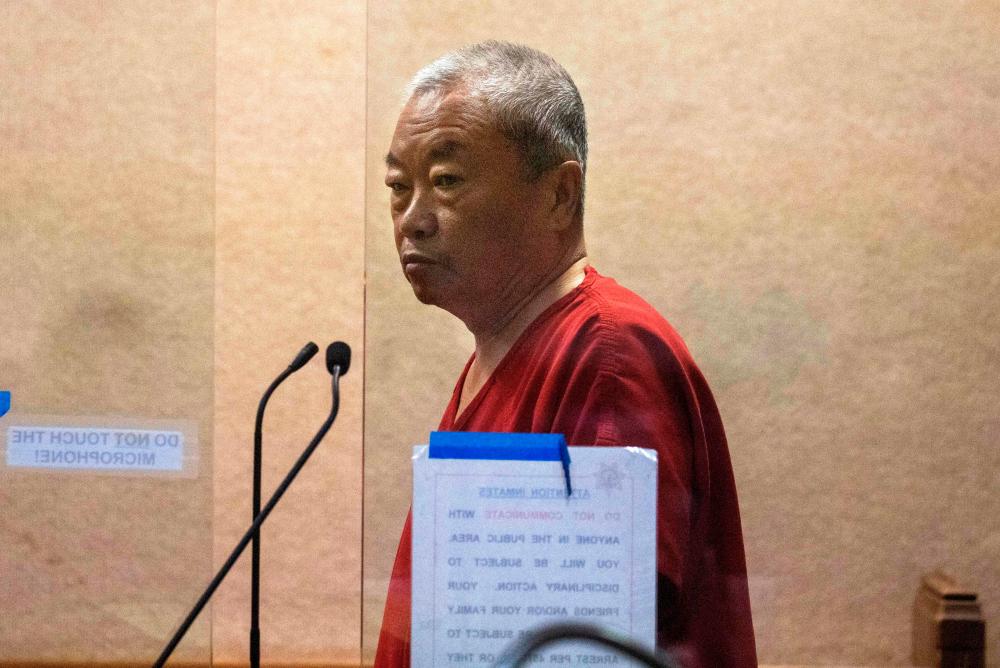 Chunli Zhao, the man who is accused of shooting dead seven people in Half Moon Bay, California, appears for his arraignment at the San Mateo Criminal Court in Redwood City, California, on January 25, 2023. AFPPIX

REDWOOD CITY: An immigrant farm worker accused of shooting seven people to death near San Francisco, some of them his co-workers, made his first court appearance on Wednesday after he was charged with murder in California’s second deadly gun rampage in recent days.

Chunli Zhao, 66, the lone suspect in Monday’s massacre at two mushroom farms in the seaside town of Half Moon Bay, was formally presented with seven counts of premeditated murder and a single count of attempted murder lodged in a criminal complaint filed by local prosecutors.

Zhao, handcuffed and garbed in a red jumpsuit, was ordered held without bond during a brief hearing before a judge in San Mateo County Superior Court in nearby Redwood City, California. He was assigned two private defence lawyers, but no plea was entered.

The next court proceeding in the case was set for Feb 16.

A Mandarin-language translator was provided for the defendant, who according to district attorney Steve Wagstaffe is a Chinese citizen who has resided in the US for at least 10 years.

After the hearing, Wagstaffe told reporters outside the courthouse that prosecutors have not yet determined Zhao’s precise immigration status, or whether he entered the country legally.

The prosecutor said authorities do have an idea about the suspect’s motives but declined to share that.

The district attorney also said Zhao was “cooperative with sheriff’s detectives” who initially interviewed him through a Mandarin interpreter, without an attorney present, following his arrest and that he gave “a complete statement.”

Still, the expectation is that he will enter a not-guilty plea as the proceeding progress, “and we want to make sure this man gets a fair trial,” Wagstaffe said.

Under California law, defendants convicted of murder with “special circumstances” can be eligible for the death penalty, but Governor Gavin Newsom in 2019 declared a moratorium on executions. The state has not put a condemned inmate to death since 2006.

Otherwise, the maximum sentence is life in prison without the possibility of parole, Wagstaffe said.

Meanwhile, US vice-president Kamala Harris, a California native, planned on Wednesday to visit the Los Angeles suburb of Monterey Park, site of the first of the recent deadly rampages. She was expected to meet with some families of the 11 people who were fatally shot in a dance hall on Saturday night by a gunman who later took his own life.

California’s firearm laws are among the strictest in the country, and the two shootings, coming in quick succession, left the state reeling from one of the bloodiest spates of mass gun violence in decades.

Authorities said each of the two killing sprees represented the single greatest loss of life from a single act of violence in Los Angeles and San Mateo counties.

Asked if investigators believed the Half Moon Bay killings were a “copy-cat” crime inspired by the shooting rampage in Monterey Park two days earlier, Wagstaffe said flatly, “No.”

Zhao was taken into custody on Monday evening outside a sheriff’s station, where police said he had driven shortly after the attack on farm workers.

The precise motive for the shooting remained unclear. Zhao had been employed by one of the growers, Mountain Mushroom Farm, and had resided at the property along with some other employees, according to a spokesperson for California Terra Gardens, which owns the farm. Authorities said early evidence indicated the bloodshed stemmed from a workplace grievance. The second crime scene, Concord Farms, is about a mile away.

Half Moon Bay, a community of about 12,000 residents south of San Francisco, is home to both a luxury resort and a low-income farming community. The shooting cast a renewed spotlight on hardships faced by the area’s farm workers, many of them immigrants from Latin America and Asia who often live in squalid labour encampments and toil long hours under poor conditions for extremely low pay.

Jose Romero’s brother Pedro was injured in the attack and was hospitalised as of Tuesday, a cousin told Reuters.

The Half Moon Bay killings unfolded two days after another gunman 380 miles to the south opened fire at the Star Ballroom Dance Studio, a club frequented mostly by older patrons of Asian descent in Monterey Park.

Eleven people died and nine were injured in Saturday night’s gunfire, which some survivors and bystanders said they initially mistook for fireworks as the predominantly Asian-American community was observing the start of the Lunar New Year.

Authorities said the assailant, Huu Can Tran, 72, drove a short time later to a second dance hall in the neighbouring town of Alhambra. There, the club’s operator disarmed him before he could open fire.

The next morning, Tran shot himself to death behind the wheel of his getaway vehicle as police closed in on him south of Los Angeles.

Although the motive remained unclear, Tran was known to have been a longtime regular of the Star Ballroom. One acquaintance – a tenant of a Los Angeles-rental property he owned – suggested Tran may have been nursing a grudge against other patrons there.

Both rampages were notable for the retirement age of the suspects, much older than typical perpetrators of deadly mass shootings that have grown all too commonplace in the US.

Authorities said the two men both used a semi-automatic pistol, and the victims in each case came from immigrant communities. - Reuters