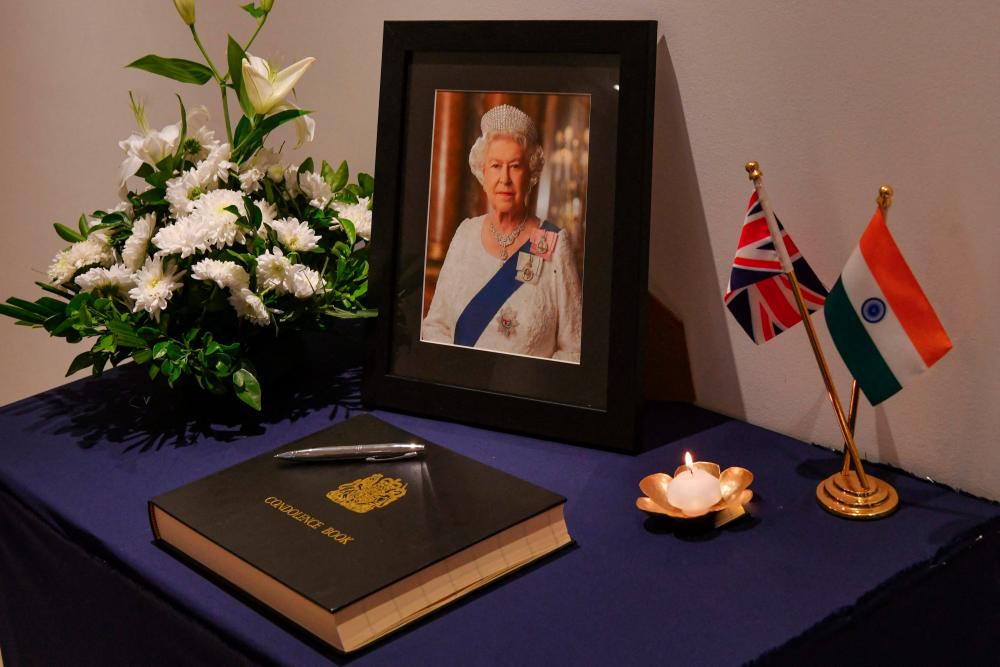 A portrait of Queen Elizabeth II placed next to a condolence book at the British Deputy High Commissioner’s Residence in Bangalore on September 9, 2022. - AFPPIX

NEW DELHI: India, being a Commonwealth realm, has declared Sept 11 a day of national mourning to honour the memory of Britain’s Queen Elizabeth II, who passed away on Sept 8 after a 70-year reign, the Indian Ministry of External Affairs said on Friday.

Fifteen commonwealth realms are sovereign countries in the Commonwealth of Nations — a voluntary association of 56 states, the majority of of which are British colonies or dependencies of the colonies — whose formal head of state is the British monarch.

“​Government of India has declared one-day national mourning on Sunday, Sept 11, 2022 as a mark of respect to Her Majesty Queen Elizabeth II, United Kingdom of Great Britain and Northern Ireland who passed away on Sept 8, 2022. The National Flag will be flown at half-mast on the day of mourning throughout India on all buildings where the National Flag is flown regularly and there will be no official entertainment on the day,“ the Indian foreign ministry said in a statement, reported Sputnik.

The British Overseas Territory of Gibraltar has also joined the United Kingdom in mourning the loss of the monarch. As early as Thursday, the authorities lowered all flags on government buildings. The flags will remain at half-mast until the day of the queen’s funeral and will only be raised for the period of the proclamation of the new UK monarch — Elizabeth’s son, King Charles III.

All events marking Gibraltar’s National Day — the celebration of the first sovereignty referendum in 1967 — will be cancelled. In addition, the territory also plans to pay homage to the deceased queen with a salute of 96 shots, which symbolise the number of years Elizabeth II lived.

The United Arab Emirates and Kenya have also declared mourning that will last from Sept 9-12. Moreover, on Friday, Cuban President Miguel Diaz-Canel said that his country would be in grief from 06:00 to 00:00 local time on Sept 9.

The UK was also joined in its mourning by Kuwait, Brazil and other Commonwealth realms apart from India.

Meanwhile, Queen Margrethe II of Denmark has decided to cancel several events dedicated to the 50th anniversary of her reign because of the death of the British monarch.

“This means that the ceremonial celebration with the Guard Hussar Regiment’s Mounted Squadron and horse-drawn carriage transport by the Royal Mews is cancelled,“ a statement by the Danish Royal House read.

In addition, the changing of the guard, during which the Danish queen and the royal family were supposed to appear on the balcony of Amalienborg Palace, was cancelled, and the programme of the gala concert scheduled for Saturday was adjusted.

UK Queen Elizabeth II passed away on Thursday at Balmoral Castle in Scotland surrounded by her family after 70 yeas on the Throne. She became the second-longest reigning monarch in European history following French King Louis XIV. Now, after the queen’s death, the British Crown has been inherited by her son, Charles III. - Bernama