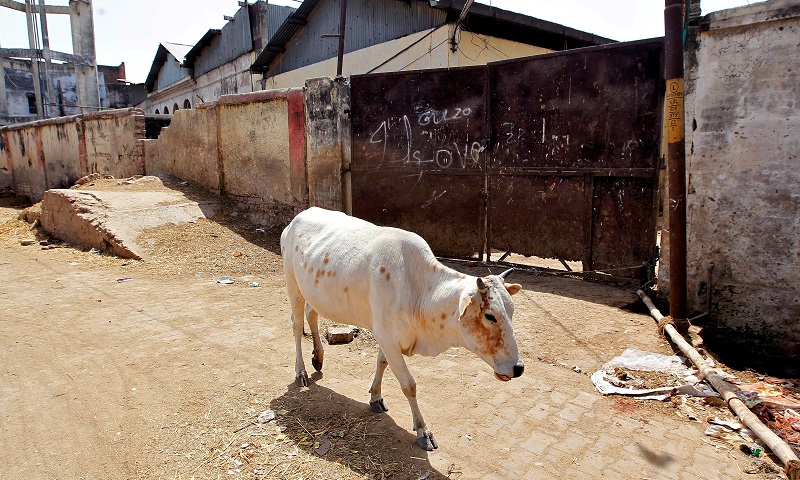 The state imposes a 10 year jail term for the slaughter of cows. — Reuters

NEW DELHI: India’s only dedicated “cow minister” has been dumped in state elections, ending a controversial tenure that saw hundreds of the sacred animals starve to death and poisoned on his watch.

Otaram Dewasi, the first head of Rajasthan’s cow ministry, was turfed out yesterday when the Hindu nationalist Bharatiya Janata Party (BJP) was thumped in the desert state and two other key regional polls.

Dewasi, who carried a traditional stick and wore the red turban and white sarong of a desert herdsman, was defeated by 10,000 votes by an independent candidate.

Hindus consider cows sacred and the BJP, led by Prime Minister Narendra Modi, has campaigned for their protection at a state and national level and introduced harsh penalties for mistreating them.

But the cause has spawned cow vigilantism in parts of India in recent years, with people accused of carrying beef or slaughtering the animals murdered by mobs.

Rajasthan, a western state bordering Pakistan, has witnessed some of the most high-profile cow lynchings in recent times, including the brazen beating to death of a Muslim dairy farmer on a busy highway last year.

The state created India’s first ministry exclusively for cow protection in 2015 when the BJP won the state and appointed Dewasi, a policeman turned politician, to be in charge.

He imposed a new 20 per cent surcharge on new property purchases — dubbed a “cow tax” — to generate cash to run the 2,300 shelters in his state for abandoned cows.

He also branded roughly 85 per cent of the 650,000 cows under his care to stop them being smuggled.

But his reputation was marred in 2016 when 500 cows starved to death at a state-run shelter when the facility was flooded during heavy rains.

In August, 28 more died, further denting his image as a sacred custodian in a state where cow slaughter comes with a 10 years jail.

The BJP campaigned in Rajasthan’s state elections this month on tougher laws for cow slaughter and more money for shelters -- but was comprehensively defeated by the Congress Party in results announced Tuesday.

The opposition party led by Rahul Gandhi also beat the BJP in two other key states in India’s Hindi-speaking heartland known as the “cow belt” -- Madhya Pradesh and Chhattisgarh.

He won in 2014 with a record mandate, in part promising to introduce a nationwide ban on cow slaughter and to declare the beasts a national animal.

Rights groups say the party’s ascent to power has witnessed a rise in vigilantes murdering Muslims and low-caste Hindus — two minorities who consume beef —over allegations of cow slaughter or smuggling. — AFP