Israel police in standoff with Palestinians over Jerusalem eviction 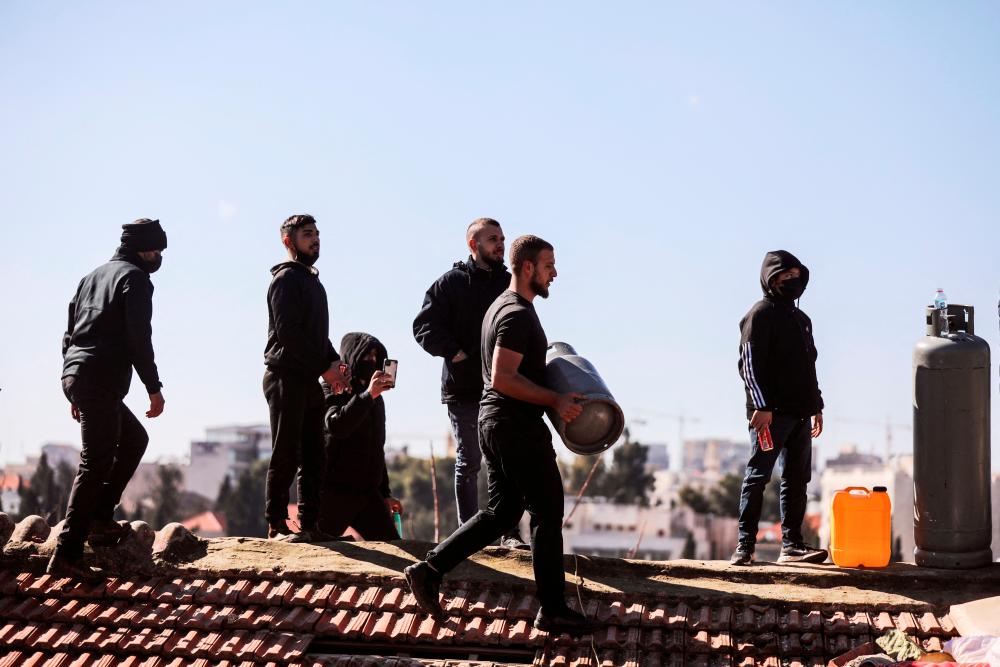 Palestinians take to the roof of a home, threatening to blow up the dwelling with a gas balloon after Israeli police arrive to carry out an eviction order, in the flashpoint Sheikh Jarrah neighbourhood of East Jerusalem January 17, 2022. REUTERSPIX

JERUSALEM: Israeli police were in a standoff Monday with a Palestinian man who carried a gas cannister on the roof of his home in a Jerusalem flashpoint as his family faced eviction.

Israeli media reported that Mohammed Salhiya had threatened to set himself on fire if the eviction order from Sheikh Jarrah neighbourhood of Israeli-annexed east Jerusalem was carried out.

Salhiya, whose family has been facing an eviction threat since 2017, was on the roof of his home with a large gas cannister, police and an AFP journalist said.

Police and the Jerusalem municipality said in a joint statement delegates went to the home early Monday to carry out a eviction ordered after the land was allocated for school construction “for the benefit of residents of the neighbourhood”.

An 11-day Gaza war between Israel and the Palestinians erupted last year, fuelled by anger in Sheikh Jarrah where families battled eviction orders.

Police said their “negotiators” were at the Salhiya home after several residents of the house “began to fortify themselves with a gas cannister and other flammable material”.

Witnesses told AFP that clashes between security forces and locals erupted after the police arrived but later eased.

Hundreds of Palestinians are facing evictions from their homes in Sheikh Jarrah and other east Jerusalem neighbourhoods.

In some cases, Jewish Israelis have mounted legal challenges to claim the land they say was illegally taken during the war that coincided with Israel's founding in 1948.

Palestinians rejected these claims, saying their homes were legally purchased from Jordanian authorities who controlled east Jerusalem between 1948 and 1967.

Seven Palestinian families in Sheikh Jarrah have taken their legal challenges against their eviction threats to Israel's Supreme Court. The Salhiyas are not in that group.

Jerusalem City councillor Laura Wharton, who was at the scene and due to meet the Salhiya family later Monday, criticised the municipality's actions.

“They could have built the schools in the same plot without moving the families. There is plenty of space,“ she said.

“The sad thing is this is the municipality itself doing this, it’s not some right wing settlers.”

Israel captured east Jerusalem in the 1967 Six Day War and later annexed it, in a move not recognised by the international community.

More than 200,000 Jewish settlers have since moved into the area, fuelling tensions with Palestinians, who claim east Jerusalem as the capital of their future state. - AFP 2.AC Milan on brink of Serie A title