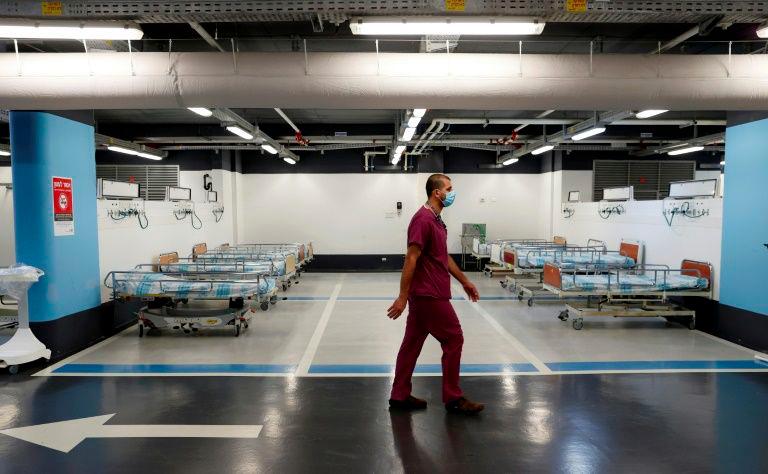 A hospital in the Israeli city of Haifa has resorted to turning its underground car park into a coronavirus ward, as demand for beds outstrips supply in the country. — AFP

HAIFA: As Israeli doctors confront a surge in coronavirus cases, with some patients waiting for hours in ambulances, one hospital is tackling the crisis by transforming its car park into a ward.

Wearing a white face mask and gown, Michael Halberthal expressed his frustration that his hospital in the northern city of Haifa has been pushed to take such a dramatic step.

“(It’s) extremely unfortunate that we have to get to this position,“ said Halberthal, general director of the Rambam Health Care Campus.

Just days after management approved the decision, the underground car park has become a ward, complete with beds and wheelchairs.

The words “Underground Emergency Hospital” greet arrivals, set to be among those rejected by a string of hospitals that have seen their coronavirus wards hit capacity since the government imposed the country’s latest nationwide lockdown on Friday.

The car park can withstand war, having been earmarked as a possible shelter after Israel’s 2006 conflict with the Lebanese group Hezbollah.

“Now we understand that this is a strategic facility of Israel and we can use it for other solutions,“ said Halberthal, as workers raced around installing medical equipment.

Parking spaces have been converted into patient bays, while different sections have been painted in bright colours.

The new ward will be ready to open on Thursday, according to hospital officials, and can accommodate 770 coronavirus patients.

For Khetam Hussein, Rambam’s head of infection control, the latest lockdown — Israel’s second since the start of the pandemic — came too late.

“And it has to be more strict,“ she said at her desk, wearing blue hospital scrubs and a face mask. “We are seeing a rise in severe cases.”

Israel has the world’s highest coronavirus infection rate as a proportion of its population, according to an AFP tally of the past fortnight, and on Wednesday the health ministry announced nearly 7,000 positive cases over 24 hours.

Israel’s second wave of cases has hit particularly hard in the country’s north, home to much of the Arab minority that makes up around 20% of the population.

“All the Israeli hospitals are very crowded and some of these hospitals reached 100% capacity,“ said Hussein.

‘We don’t have budget’

In recent days some hospitals have stopped accepting ambulances, according to an official from Magen David Adom, Israel’s emergency medical service.

“Our teams wait hours before being able to drop a patient off at the hospital, and this prevents them from taking care of other patients,“ the official told AFP.

Coronavirus patients waiting in ambulances are not allowed to enter hospitals and are given a container to use as a toilet inside the ambulance, he added.

While Israel was praised for its initial handling of the pandemic, faith in Prime Minister Benjamin Netanyahu’s ability to handle the health crisis has plummeted.

Just 27% of Israelis trust their premier to manage coronavirus, down from 56% in late March, according to a survey published Wednesday by the Israel Democracy Institute.

While Rambam has succeeded in hugely expanding its capacity, in east Jerusalem one hospital is suffering from a lack of drugs and other medical supplies.

“Yesterday, I had to refuse 10 patients,“ said Jamil Kussa, director of Saint Joseph’s Hospital, where a coronavirus ward opened in March.

A second ward is needed to cope with the spike in cases, he said.

“But we don’t have the necessary budget.” — AFP 2.Most poultry farms ready to supply chickens to the market: MAFI

5.Sixth seed Jabeur knocked out of French Open in first round