Myanmar militia hunts for bodies after clash with army - media 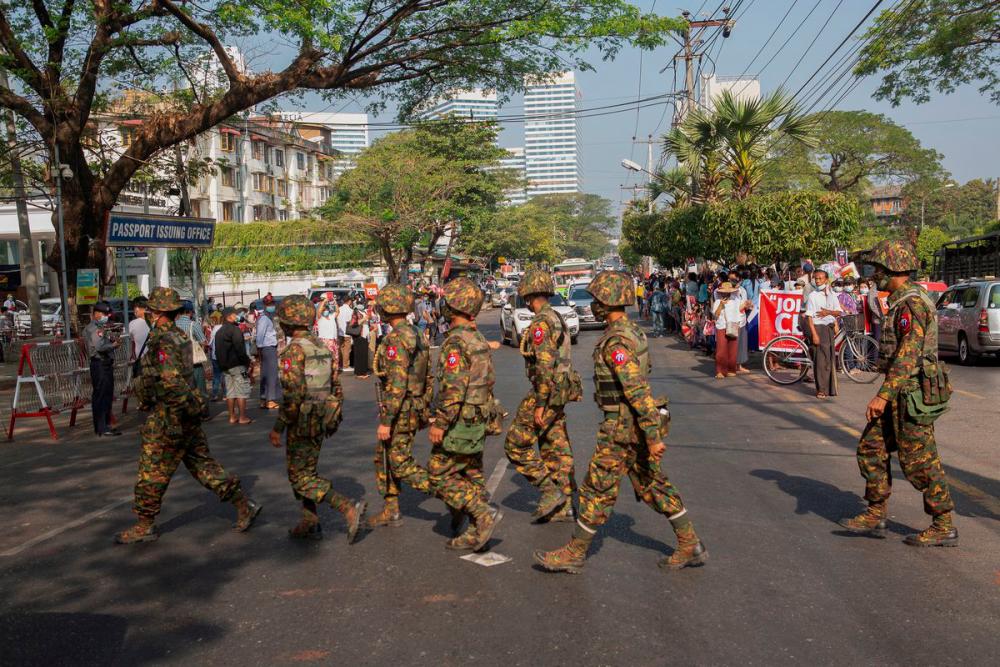 Soldiers cross a street as people gather to protest against the military coup, in Yangon, Myanmar, February 15, 2021. — Reuters/Stringer

A Myanmar militia group opposed to military rule has found at least seven bodies with bullet wounds in a jungle area after clashes with the army and it was looking for more missing people on Friday, a militia member and media said.

Since the military overthrew the elected government of Aung San Suu Kyi in February, dozens of often lightly armed militias have been established across Myanmar and been involved in skirmishes with the far better equipped army.

The bodies, which were found in Kani, a town in the central region of Sagaing, had been buried and five were identified as militia fighters, said a Kani militia member.

“There are many people missing at this moment. We don’t know whether they got arrested or killed,“ the militia member, who declined to be identified, said by telephone, adding the search for more victims was being hampered because of concerns about land mines in the area.

The Myanmar Now news portal said the bodies had been discovered after a clash between the militia and the army on Monday and cited witnesses as saying some of the bodies appeared to have been disfigured and showed signs of bruising.

Reuters could not independently verify the claims and a spokesman for the junta did not answer calls seeking comment.

Sagaing has seen fierce fighting between the army and militias in recent months. The Irrawaddy news portal said 57 members of another militia in Mingin town had been detained on Wednesday after an ambush by soldiers.

This month, dozens of people were killed in the farming town of Depayin and thousands fled after the army moved in to crush a militia there, residents said.

Security forces have killed at least 936 people since the coup, according to the Assistance Association of Political Prisoners, a Thai-based activist group. The junta has disputed the tally and also said many members of the security forces have been killed. — Reuters

3.Malaysian exports of Kimanis crude said to be hit by issue at Shell field

4.Injured Blundell out of New Zealand’s ODI series in Pakistan

5.Man drowns in river while fishing