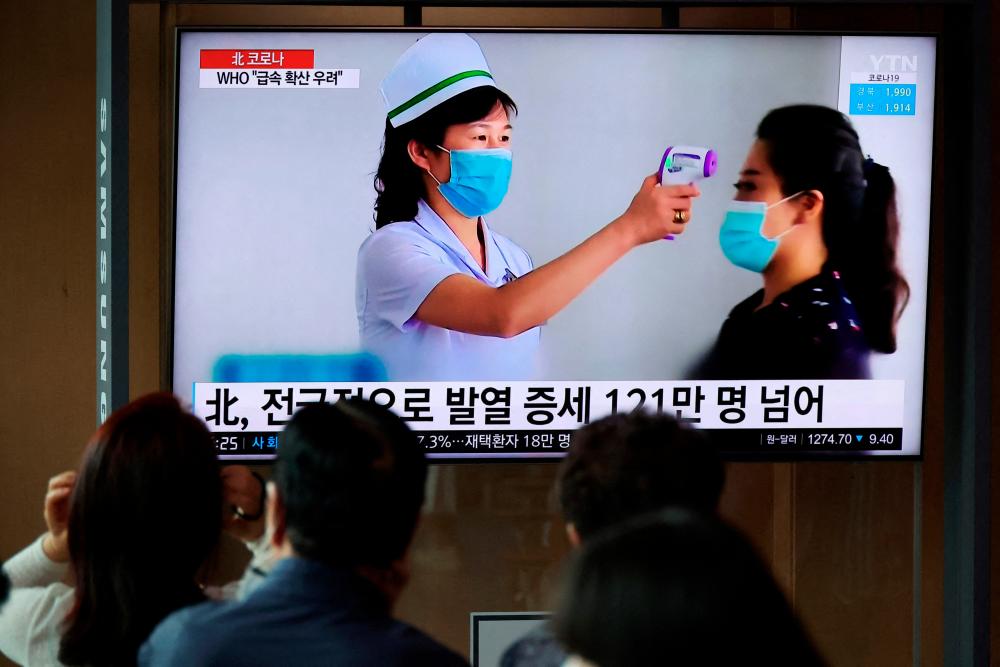 FILE PHOTO: People watch a TV broadcasting a news report on the coronavirus disease (COVID-19) outbreak in North Korea, at a railway station in Seoul, South Korea, May 17, 2022. REUTERSPIX

SEOUL: North Korea on Friday said all of its fever patients have recovered, marking the end of its first wave of the coronavirus pandemic, but challenges linger with economic hardships deepening and an unvaccinated population exposed to future resurgences, analysts said.

While state media said the “anti-epidemic situation ... has entered a definite phase of stability”, rather than boasting of victory, North Korea said it would “redouble efforts to maintain perfection in the execution of state anti-epidemic policies”.

The reclusive country has never confirmed how many people caught Covid-19, apparently lacking testing supplies. But it said around 4.77 million fever patients have fully recovered and 74 died since late April. It has reported no new fever cases since July 30.

South Korean officials and medical experts have cast doubts on those figures, especially the number of deaths.

Shin Young-jeon, a professor at Hanyang University’s medical school in Seoul, said while the peak of the first Covid wave may have passed, the stated fatalities were nearly “impossible” and there could be up to 50,000 deaths.

“Their success, if any, should lie in the fact that the outbreak didn’t lead to a political or social chaos. Whether their Covid response was successful was another problem.”

South Korea’s Unification Minister Kwon Young-se, responsible for inter-Korean affairs, said this week there were “credibility issues” with the North’s data but the Covid situation seemed “somewhat under control.”

The national football league kicked off its season this week following a three-year halt, state media reported, as did swimming, yachting and bowling competitions.

Most games appeared to be held without spectators, but a photo of a taekwondo match carried on Monday by the official Rodong Sinmun newspaper showed an audience wearing masks and sitting seats apart.

Some analysts say challenges around the economy, food security and public health remain and could be further exacerbated if infections return as seen in Asian neighbours amid a spread of Omicron sub-variants.

Still, leader Kim Jong Un has yet to lift strict movement restrictions, and the Chinese border remains shut, with no officials travelling abroad and diplomatic missions in Pyongyang vacant.

“Despite the weak medical infrastructure, each North Korean community has a designated doctor, and the socialist system’s strict controls and concerted responses might help find out and isolate potential cases,“ said Lim Eul-chul, a professor of North Korean studies at Kyungnam University in South Korea.

Cheong Seong-chang, a senior fellow at the Sejong Institute, said the North’s outbreak was possibly less severe than expected, as the publicised fever cases could include large numbers from other seasonal epidemics.

South Korea’s spy agency said in May that some waterborne diseases such as typhoid or cholera were already widespread in the North before Covid hit.

Cho Han-bum, a senior fellow at the Korea Institute for National Unification in Seoul, said Kim might have decided to seek herd immunity in the face of worsening food shortages and public sentiment due to restrictions.

Experts said the pandemic and a nationwide lockdown would deepen the North’s already dire food situation, and the World Health Organization said in June the Covid situation there could be getting worse.

“The North could be trying to ease the restrictions to let people go out and feed themselves, as food shortages become serious and there would be more outbreaks,“ Cho said. - Reuters