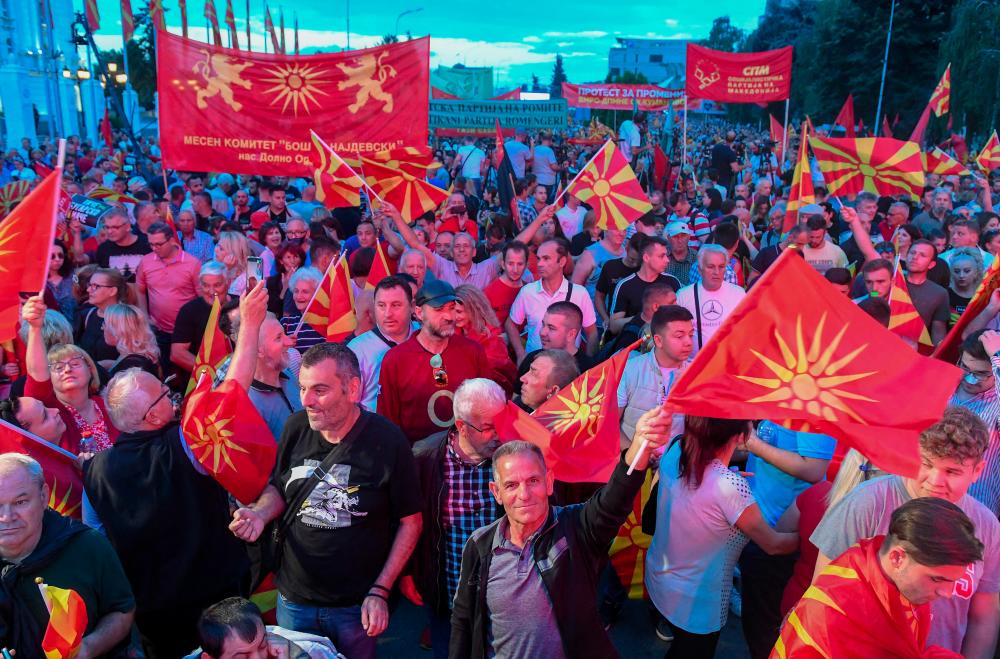 Supporters of North Macedonia's main opposition party VMRO-DPMNE wave party flags and national flags as they march during a rally in front of a government building in Skopje, on June 18, 2022. AFPpix

The protest was called by the main opposition VMRO-DPMNE, a rightwing nationalist party, and the marchers waved Macedonian flags and placards denouncing the leftwing SDSM-dominated government.

The VMRO-DPMNE has been calling for early elections practically since the government in 2018 settled its longruning name dispute with Greece, clearing a serious obstacle in the way of EU and NATO membership.

While the VMRO-DPMNE condemned the deal, it meant an end to Athens’ veto on Skopje’s efforts to join the two organisations.

The Prespa agreement added “North” to Macedonia’s name to distinguish the Balkan state from Greece’s neighbouring northern region of Macedonia.

Since November 2020 however, Bulgaria has been blocking their path to EU membership because of a dispute rooted in history and language.

At the rally, senior VMRO-DPMNE figures attacked the government’s record and its handling of the dispute with Bulgaria.

Bulgaria claims the Macedonian language is a dialect of Bulgarian, and both countries lay claim to certain historical events and figures, mainly from the Ottoman era.

Bulgaria also says it is trying to protect the rights of ethnic Bulgarians in North Macedonia. — AFP