Nagaenthran has been accorded full due process under the law 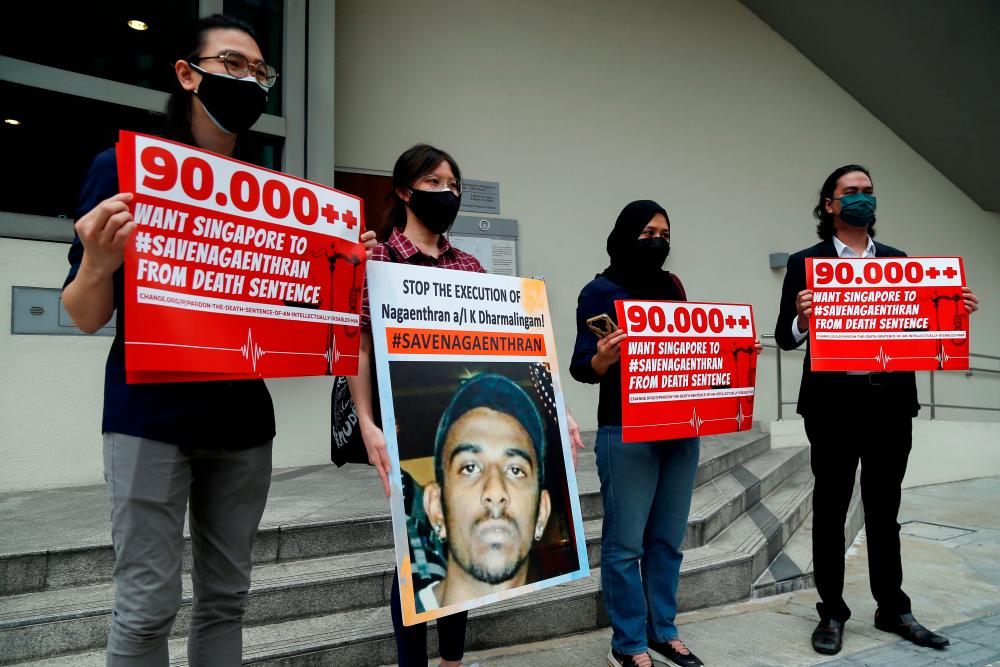 Activists hold placards and a poster against the imminent execution of Nagaenthran Dharmalingam, who was sentenced to death for drug trafficking in Singapore, outside the Singapore High Commission in Kuala Lumpur, Malaysia November 23, 2021. REUTERSpix

SINGAPORE: Malaysian Nagaenthran K Dharmalingam who is in death row in Singapore has been accorded full due process under the law.

This is the reply from Singapore President Halimah Yacob to Malaysia’s Yang di-Pertuan Agong Al-Sultan Abdullah Ri’ayatuddin Al-Mustafa Billah Shah, who had written to the president of Singapore appealing clemency for Nagaenthran.

A statement issued by the republic’s Ministry of Foreign Affairs on Friday said this in response to media queries on the appeal letters from Malaysian leaders and the fate of the 33-year old Malaysian awaiting execution for a drug offence in Singapore.

Both Malaysian Prime Minister Datuk Seri Ismail Sabri Yaakob and Foreign Minister Datuk Saifuddin Abdullah had earlier written to their Singapore counterparts, requesting for the discretion of the authorities in Singapore to grant Presidential Clemency to Nagaenthran.

Hailing from Perak, Nagaenthran was arrested by Singaporean authorities on April 22, 2009, for smuggling 42.72 grammes of diamorphine and was sentenced to death by the High Court of Singapore on Nov 22, 2010.

The appeal process through the court has already been made by Nagaenthran’s family lawyer up to the final stage, which is the Presidential Clemency that was rejected on June 1, 2020.

Nagaenthran, who has been in the death row for 11 years and scheduled to be hanged on Nov 10, 2021, however, found temporary respite on Nov 9 after the court was told he had tested positive for COVID-19 when he appeared for a last-bid attempt against his sentence.

Following the dramatic turn of events, Nagaenthran was granted a further stay of execution by the Court of Appeal.

Nagaenthran’s lawyers claim that he is intellectually disabled. - Bernama