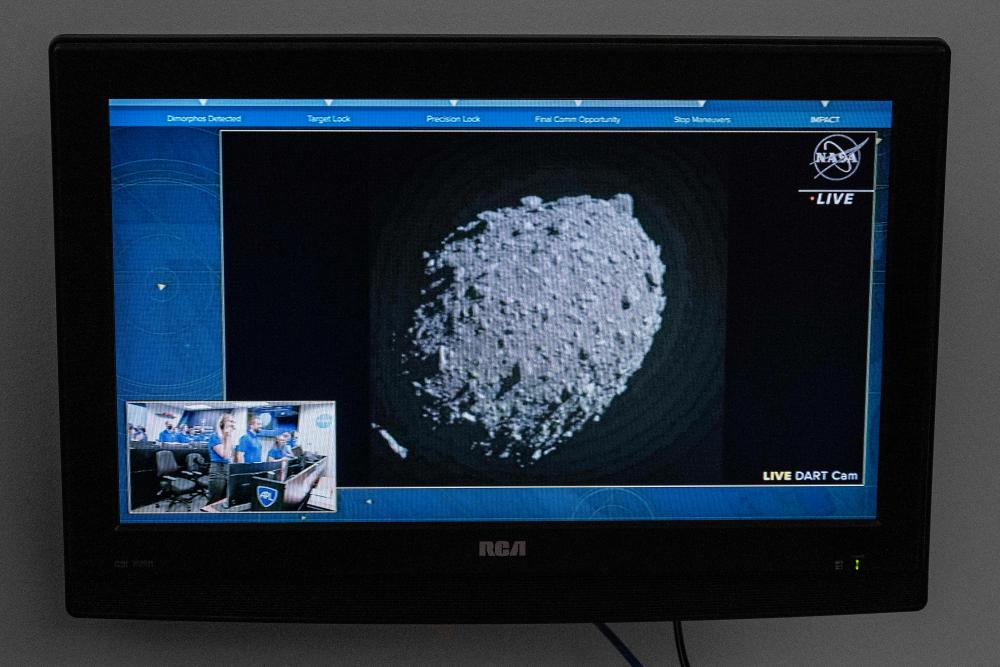 A television at NASA's Kennedy Space Center in Cape Canaveral, Florida, captures the final images from the Double Asteroid Redirection Test (DART) just before it smashes into the asteroid Dimorphos on September 26, 2022. - AFPPIX

HOUSTON: NASA successfully crashed a spacecraft into an asteroid Monday night in an effort to one day save the Earth, Anadolu Agency (AA) reported.

The Double Asteroid Redirection Test (DART) was streamed live by the US space agency to show the world its planetary defence test in the event an asteroid heads on a collision course with our planet in the future.

The intentional crash was seven years in the making, with NASA looking to see whether it could manually direct a space probe to collide with an asteroid and deflect its trajectory to prevent a potentially catastrophic impact on Earth.

“Wow, that was amazing, wasn’t it?” said DART lead scientist Nancy Chabot moments after the spacecraft successfully collided with the asteroid.

The DART mission launched last November from Vandenberg Space Force Base in California.

On Monday night, mission controllers hand-controlled the spacecraft to steer itself into the asteroid called Dimorphos 6.5 million miles (10.5 million kilometres) away in deep space.

The spacecraft smashed into the asteroid at a blistering speed of 15,000 miles per hour (24,140 km per hour) with special cameras from an Italian space probe capturing the cosmic impact.

“This was a really hard technology demonstration that hit a small asteroid, we’ve never seen before, and do it in such spectacular fashion,“ said Chabot.

NASA says the goal was not to destroy the asteroid but to see if it can manually deflect it from striking the planet if scientists see far enough in advance that an asteroid is on a collision course with Earth.

Scientists will now take the recorded data from the impact using telescope recordings of the crash to see what difference the impact made in redirecting the asteroid’s trajectory.

According to NASA, no known asteroid larger than 450 ft. (137 metre) across has a significant chance of smashing into Earth over the next 100 years. - Bernama