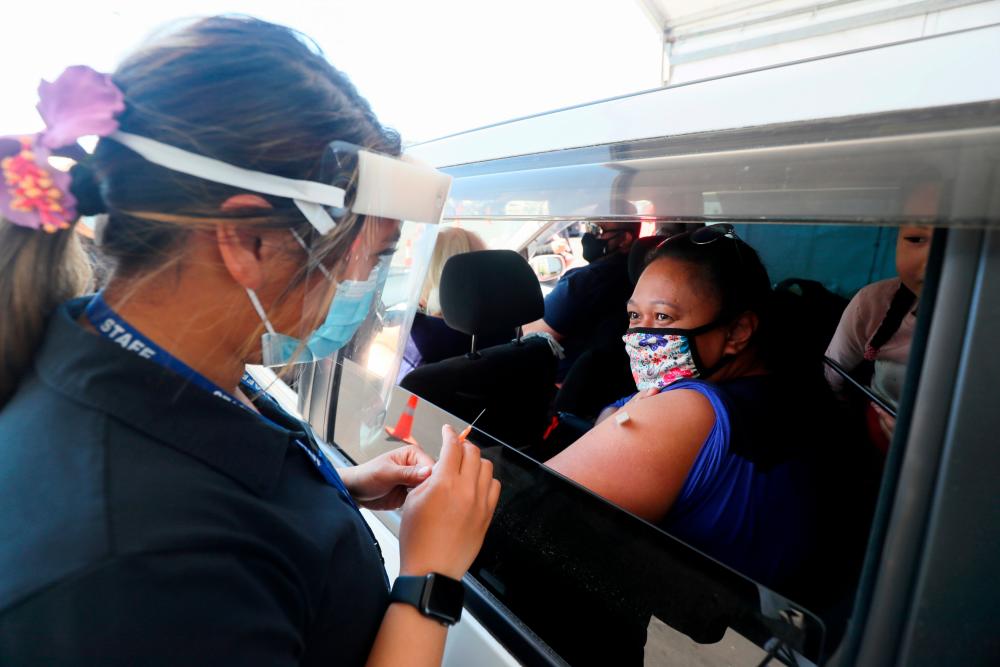 FILE PHOTO: A member of the public receives a Pfizer vaccine at a drive-through coronavirus disease (Covid-19) vaccination clinic in Otara during a single-day vaccination drive, aimed at significantly increasing the percentage of vaccinated people in the country, in Auckland, New Zealand, October 16, 2021. REUTERSpix

NEW ZEALAND reported record daily Covid-19 cases for the second time in three days on Thursday, as the Delta variant continued to spur a spike in infections in the country’s biggest city, Auckland.

Authorities reported 102 new Covid-19 infections, of which 94 were in Auckland, taking the total number of cases in the current outbreak to 2,260. There have been 28 deaths in total since the pandemic began and 46 people are currently hospitalised because of the virus.

New Zealand had stayed largely virus-free for most of the pandemic until the Delta outbreak in mid-August that has spread across Auckland and neighbouring regions, prompting tight restrictions on some 1.7 million Aucklanders that were extended further https://www.reuters.com/world/asia-pacific/new-zealand-pm-ardern-extends-covid-19-lockdown-auckland-2021-10-18 this week.

Authorities have said infections are likely to rise until vaccination rates accelerate and have urged people to get inoculated quickly - a call reiterated by deputy Prime Minister Grant Robertson on Thursday.

“The bottom line ... is that the vaccine is key to keeping you, your family and your community safe,“ Robertson said at a news conference.

“We are facing this outbreak with a higher rate of vaccination than perhaps others have in other countries. We are in a strong position, but we do need to build on that and see more people be vaccinated.”

Though tough restrictions in Auckland for more than two months have not slowed the outbreak, New Zealand’s cumulative load of 4,956 confirmed cases is far lower than many comparable countries.

Some 68% of New Zealanders are fully vaccinated, while 86% have received at least one dose.

The government has ditched its Covid-19-free strategy in favour of learning to live with the virus. On Wednesday it said senior secondary school students in some areas would return to classrooms on Tuesday. — Reuters