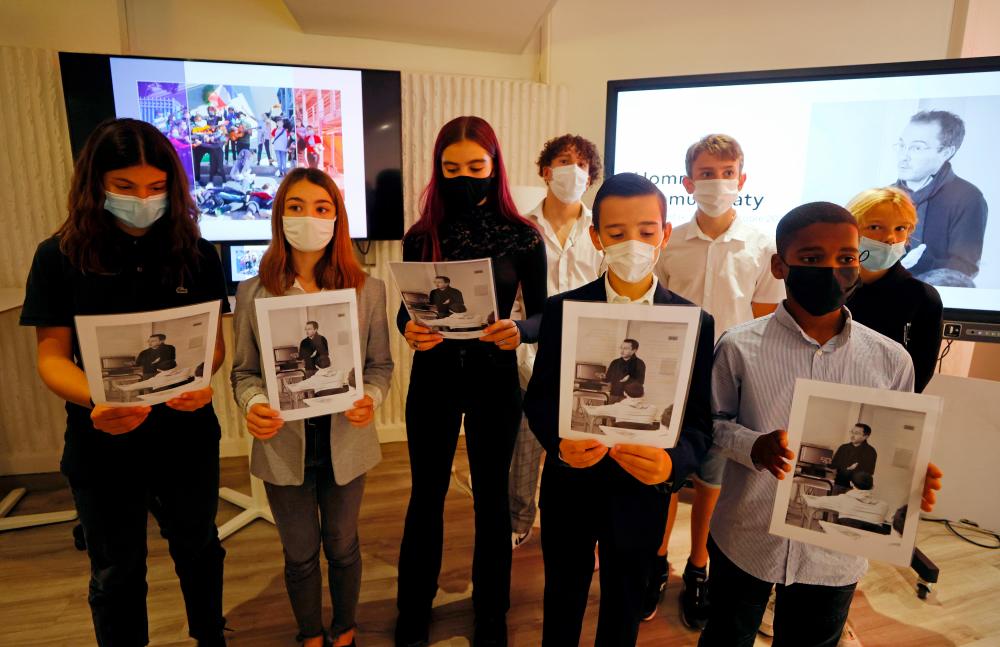 Schoolchildren hold a picture of French history teacher Samuel Paty, one year after he was beheaded outside his school in the Paris suburb of Conflans-Sainte-Honorine, during a ceremony at the Nice Education offices in Nice, France, October 15, 2021. REUTERSpix

PARIS: School children across France paid tribute to the late history teacher Samuel Paty on Friday to mark the passing of a year since he was beheaded by an Islamist radical in an attack that struck at the heart of the country’s secular values.

Paty’s attacker, a teenager of Chechen origin, had wanted to avenge the teacher’s use of cartoons of the Prophet Mohammad in a class on freedom of expression for 13-year-olds. Muslims see any depiction of the Prophet as blasphemous.

At a new school in Valenton, south of Paris, that has been named after Samuel Paty, children sang a song about freedom of speech in ceremony for the slain teacher on Friday.

“It is moving because Samuel Paty was killed in such a horrific way. And so singing for him makes you very emotional,“ said 6th grade student Yona Sehi.

Paty was decapitated by Abdullakh Anzorov with a large knife on a street in a middle-class Paris suburb in broad daylight. Police shot dead the 18-year-old soon afterwards.

In a school in Creteil, a suburb of Paris, superintendent Daniel Auverlot unveiled a plaque with Paty’s name on a hall named after him. “Samuel Paty hall, 1973-2020. Assassinated because he defended freedom of speech”, the plaque read.

“Some said it was the 9-11 of the French education system. But there is also great hope, because our teachers keep on working towards teaching students how to live together, in tolerance and mutual respect,“ Auverlot said.

A year ago, President Emmanuel Macron described Paty as a “quiet hero” dedicated to instilling the democratic values of freedom, equality and solidarity in his pupils.

“We will never forget Samuel Paty. To celebrate his memory is to celebrate freedom, the republic and school,“ Education Minister Jean-Michel Blanquer said this week.

France is home to Europe’s largest Muslim minority and has suffered a wave of attacks perpetrated by Islamist militants or their sympathisers in past years.

Paty’s murder exposed the deepening tensions between France’s model of state secularism, or laicité, that demands the separation of religion and public life and a minority of French Muslims and adherents of other faiths who seek to express their religious identity.

In the wake of his killing, some teachers acknowledged they censored themselves to avoid confrontation with pupils and parents over religion and free speech. -Reuters