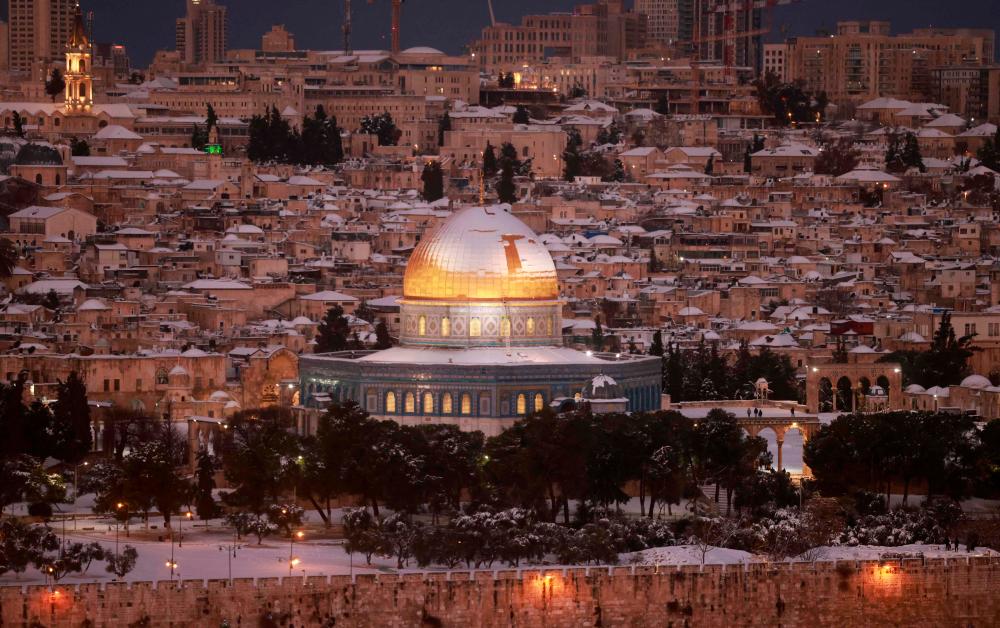 Snow covers the Dome of the Rock at the Al-Aqsa Mosque compound and the city of Jerusalem on January 27, 2022. AFPPIX

JERUSALEM: Snow carpeted Jerusalem and its holy places Thursday as a rare wintry storm swept across Israel and the Palestinian territories as well as the wider Middle East.

The cold snap, which has already caused major disruption in Athens and Istanbul, saw heavy snowfall in areas better known for their summer heat.

In the alleyways of Jerusalem's walled Old City, children pelted each other with slushy snowballs after the first flakes fell.

By morning, snow crowned the golden-tipped Dome of the Rock in the Al-Aqsa mosgue compound, Islam's third holiest site, and carpeted the esplanade in front of the Western Wall, Judaism's holiest site where Jews can pray.

Israel's meteorological service reported that between 15 and 25 centimetres (six and 10 inches) of snow had fallen overnight.

The main highways leading into Jerusalem from the north, south and west were all blocked on Thursday morning. Police said snowploughs had worked all night to clear roads inside the city.

In a country little used to such wintry conditions, few motorists have snow chains for their cars.

Schools in Jerusalem and northern Israel were closed, leaving children free to play in the snow.

The snow cover was not expected to last as warmer temperature were forecast in the coming days.

The Israel Electric Company reported that power consumption reached an all-time high overnight as Israels switched on the heating.