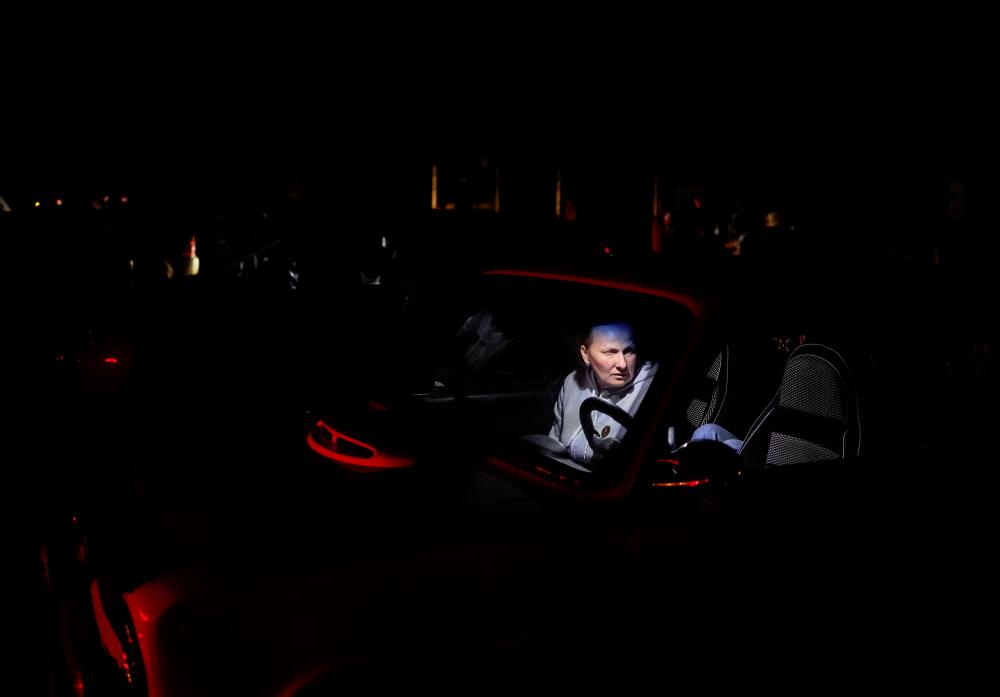 A Ukrainian refugee woman from Mariupol sits inside a car as she arrives at a registration and humanitarian aid centre for internally displaced people, amid Russia’s ongoing invasion of Ukraine, in Zaporizhzhia, Ukraine. - REUTERSpix

LYSYCHANSK: The portable radio in the dark cellar of the rocket-damaged kindergarten was transmitting news in Russian over whistling airwaves about the Kremlin’s military triumphs in Ukraine.

The six frightened women and lone man cowering in the heart of the east Ukrainian war zone had no idea whether to believe the monotone voice -- or who was actually patrolling the streets of the besieged city of Lysychansk above their heads.

All they knew was that their building was hit a few days earlier by a Grad volley that left the tail end of one of the unexploded rockets sticking out of the pavement at a sharp angle just steps from the back door.

Their feverish fears vacillated between the idea that their shelter’s lone entrance might get blocked by falling debris and that the Kremlin’s forces might come knocking unannounced.

“The Russians on the radio just said that they have captured Bakhmut. Is that true?” Natalia Georgiyevna anxiously asked about a city 30 miles (50 kilometres) to the southwest that remains under full Ukrainian control.

“We do not really know anything,“ her neighbour Viktoria Viktorovna added from a corner cot positioned just outside the beam of light illuminating a lone patch of the dank cellar.

“I guess we still have the Ukrainians here, no?”

Nearly three months of war have transformed this coal mining city of 100,000 mostly Russian speakers into a wasteland that lacks everything from water and power to cell phone service.

Most people who crawl out of their shelters during afternoon lulls in fighting make a beeline for the city’s lone natural spring to stock up on water that they must boil to make safe to drink.

Some of the women in the kindergarten basement -- so frightened they only divulge their patronymics instead of their last names for fear of being discovered and punished -- said they had not ventured outside for two months.

This paralysing isolation is being compounded by haunting Russian and Ukrainian radio broadcasts that appear over random airwaves and present contradictory news.

The unidentified voices fade in and out and occasionally simply disappear.

“When we still had the internet, we could watch the news. But now... I have no idea who these voices are or where they come from.”

The concept of warring sides filling information vacuums with propaganda is not new.

Radio was a powerful Western weapon against the Soviet Union in the Cold War era that Moscow tried to jam.

Russia has been transmitting its take on the news across eastern Ukraine throughout an eight-year insurgency that preceded the Kremlin’s all-out invasion on February 24.

The Lysychansk broadcasts are adding to a heightened sense of paranoia that appears to reign across the utterly lawless streets of an expansive industrial zone teetering on the edge of the east Ukrainian front for weeks.

The Russians are closing in from three directions on Lysychansk’s sister city of Severodonetsk to the north.

The Ukrainians are fighting with all their might to keep the Russians from pushing south of a strategic river splitting the two cities.

This has left people such as coalminer Oleg Zaitsev worrying as much about the identity of the armed men whizzing around in battered cars as the shells randomly falling from the sky.

“I am mostly afraid that some stranger might drive up to me and ask for my papers. You never know these days whose side they are on,“ the 53-year-old said on his way back to his basement.

“They could be the Russians, and who knows what happens to you then.”

Residents said the Grad volley at the start of the week appeared to be aimed at a grade school on the opposite side of the yard that housed one of the Ukrainian units defending the city.

The controversial topic of military men occupying civilian buildings in times of urban conflict is every-present in the propaganda war being waged over Ukraine.

Some locals seethe at the idea. Others say Ukraine has no other choice because Russia was the one that brought war onto its cities.

Cellar dweller Yevghen Polchikha seemed less concerned about the morality of housing soldiers in schools than he was about the possibility of the Grad rocket still sticking out of the ground blowing up.

“It is just lying there,“ the 58-year-old said. “Our kindergarten seems sturdy enough. But you just never know.” - AFP