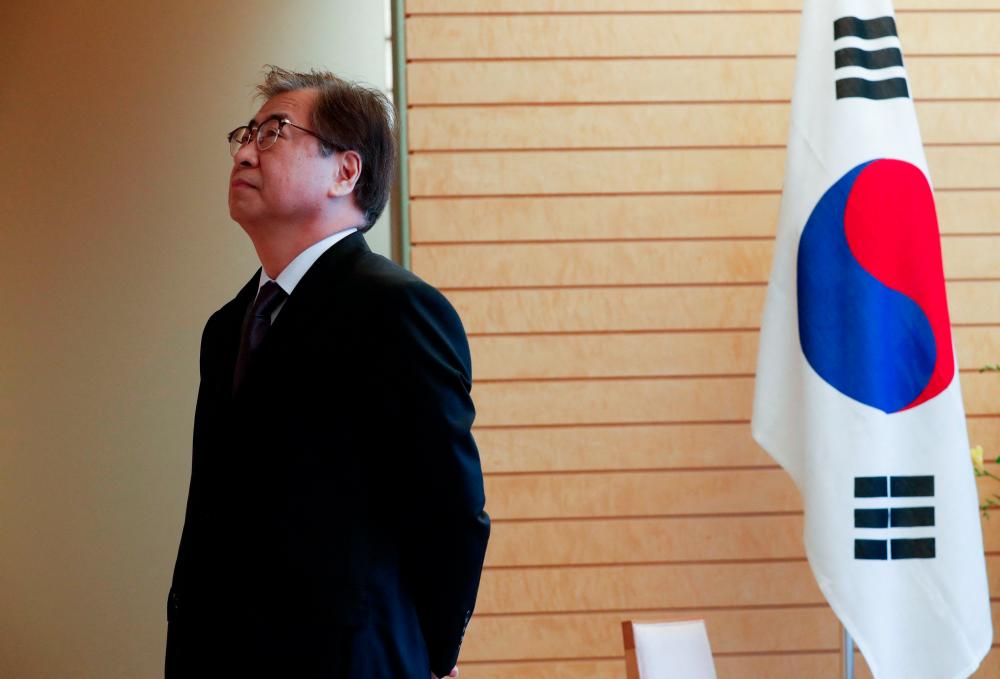 (FILES) This file photo taken on March 13, 2018 shows then South Korea's National Intelligence Service chief Suh Hoon waiting for the arrival of Japan's Prime Minister Shinzo Abe (not pictured) prior to their meeting in Tokyo. South Korea on December 3, 2022 arrested Suh Hoon, a former national security chief, on suspicion of covering up events surrounding the 2020 murder of a fisheries official by Pyongyang. - AFPPIX

SEOUL: South Korea on Saturday arrested a former national security chief on suspicion of covering up events surrounding the 2020 murder of a fisheries official by Pyongyang.

President Yoon Suk-yeol is expanding an inquiry into the highly politicised case following accusations that his predecessor mishandled the probe to curry favour with North Korea.

Suh Hoon is the first top official from the presidential office of former leader Moon Jae-in to be arrested over the case.

He is accused of ordering that intelligence reports be destroyed to conceal the killing of fisheries official Lee Dae-jun, who died near the sea border separating North and South Korea.

The former top security official also faces allegations that he manipulated evidence to support the Moon government’s controversial claim that the late fisheries official had sought to defect to the North.

Judge Kim Jeong-min of the Seoul Central District Court issued an arrest warrant for Suh on Saturday, citing “the seriousness of the crime, the status of the suspect, and a risk of destroying evidence”.

A spokesperson for President Yoon’s People Power Party confirmed the arrest in a statement.

President Yoon has been sharply critical of his predecessor’s dovish approach towards North Korea, accusing Moon of appeasing Pyongyang.

But the country’s opposition has long claimed the investigation is “political revenge” against Moon’s administration.

On Saturday they said Suh’s arrest was “hard to understand” and they would “defend the truth and justice” against Yoon’s “political retaliation”.

Fisheries official Lee was shot dead and set on fire by North Korean soldiers near the rivals’ sea border.

Moon’s government at the time said an initial probe by the coast guard suggested Lee had tried to defect to the North, citing family problems and debts from gambling.

But Lee’s brother has repeatedly slammed that idea, saying Lee would never have chosen a life in North Korea.

Yoon has also reopened inquiries into another explosive murder case in which two North Korean fishermen who confessed to killing 16 crewmates at sea were deported back to Pyongyang in 2019.

Rights groups have said the transfer of the suspects back to the North was a violation of international law because of the likelihood of the men being tortured or worse.

But his diplomacy ultimately failed, with the North now more belligerent than ever. - AFP