Spain wildfire out of control amid Europe heatwave (Updated) 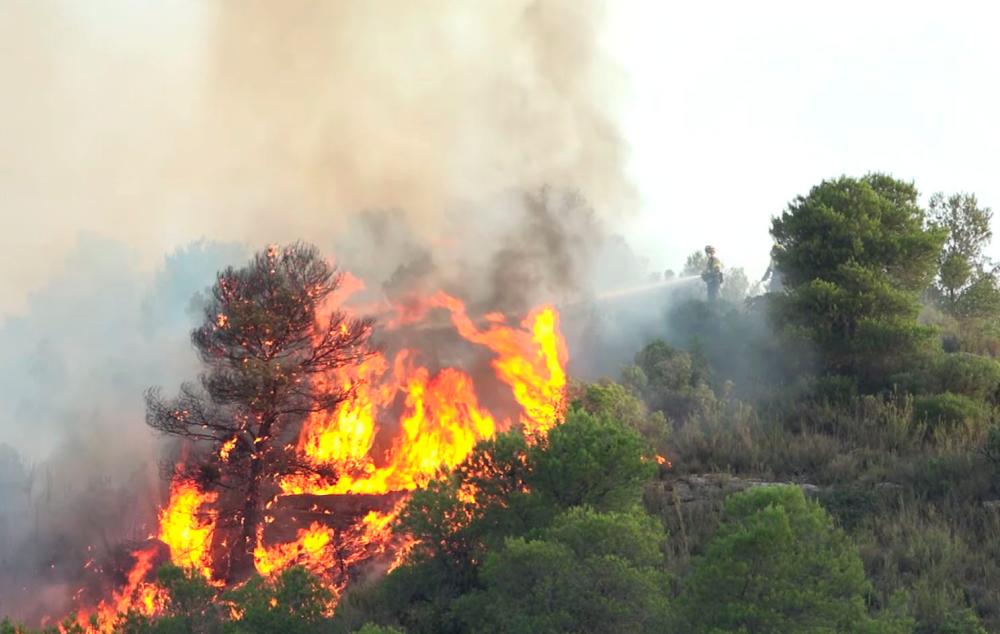 An image grab taken from a video released on June 27, 2019 by the Spanish Emergency Military Unit (UME) shows a firemean trying to extinguish a wildfire near Torre de l´Espanyol in Ribera d´Ebro, on the banks of the river Ebre, northeastern Spain. — AFP

MADRID: A Spanish forest fire raged out of control Thursday amid a European heatwave, devouring land as hundreds of firefighters battled through the night, local authorities said.

The blaze broke out Wednesday afternoon in Torre del Espanol in the northeastern region of Catalonia and by Thursday had destroyed more than 5,500 hectares (13,500 acres), the regional government said.

The fire could eventually devour 20,000 hectares in what was presented as an “extreme risk”, a statement said.

The blaze raged several kilometres from the Asco nuclear plant but officials said the site was not at risk since winds were blowing the flames away from it.

“The difficulties are such that we can’t talk about a fire that is under control or in the extinction phase, but rather that we’re at a moment when the blaze is getting bigger,“ regional interior minister Miquel Buch told Catalan radio.

Some 350 firefighters backed by around 120 soldiers and 15 aerial tanker aircraft were at the scene of the blaze, the worst in Catalonia in the last 20 years.

Buch said it might have been caused by “an accumulation of manure in a farm that generated enough heat to explode and generate sparks.”

The fire spread quickly due to strong winds and soaring temperatures.

Firefighters said that the heat, and steep terrain that make it hard to reach the flames, were hampering efforts to control the blaze.

Around 30 people have been evacuated from their homes and five roads have been shut, the regional government said. Many evacuees told Spanish media they fled with just the clothes on their backs.

Meteorologists blame a blast of hot air from northern Africa for scorching temperatures early in the European summer, which could send thermometers above 40°C (104°F) in France, Spain and Greece on Thursday and Friday. — AFP