Turkey vows intent ‘stronger than ever’ to secure Syrian border 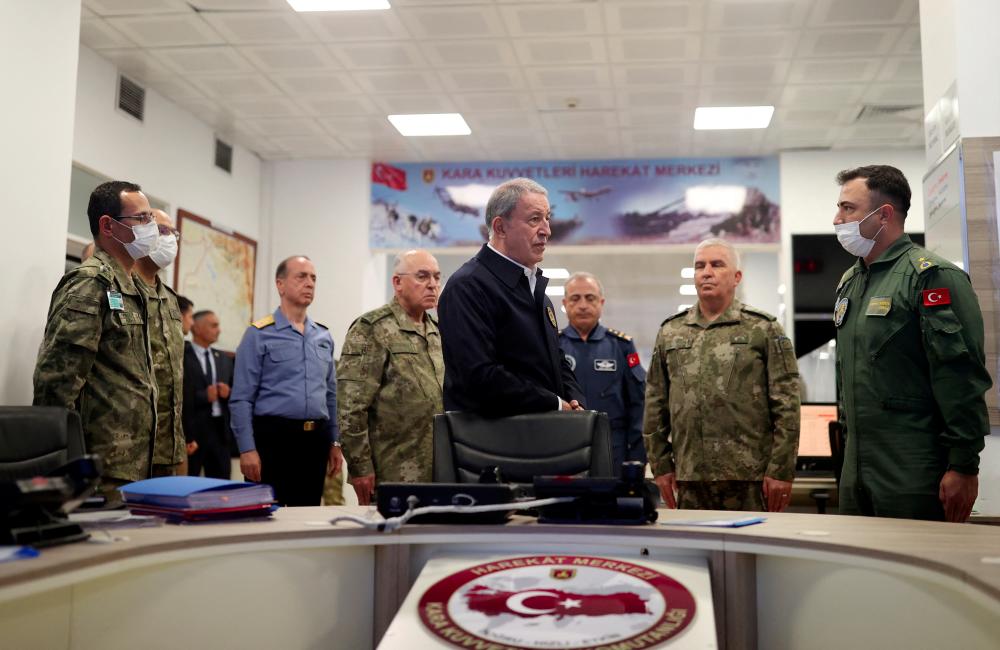 ISTANBUL: Turkey said Wednesday it was more determined than ever to secure its Syrian border from attacks by Kurdish forces, threatening a ground operation “at the most convenient time.”

Ankara launched an air strikes campaign across Iraq and Syria on Sunday as part of Operation Claw-Sword following a bombing in Istanbul on November 13 that killed six people.

“Our operations with planes, cannons and drones are only the beginning. Our determination to secure all our southern border... with a safe zone is stronger today than ever before,“ President Recep Tayyip Erdogan told lawmakers in parliament.

“While we press ahead with air raids uninterrupted, we will crack down on terrorists also by land at the most convenient time for us,“ he told lawmakers from his AKP party.

Turkey blamed the Istanbul attack on the Kurdistan Workers’ Party (PKK), which is blacklisted as a terror group by the European Union and the United States.

The PKK, which has waged an insurgency against the Turkish state since 1984, denied any role in the bombing -- the deadliest in five years after a spate of attacks in Turkey between 2015 and 2017.

Turkey has intensified air raids and artillery fire on the PKK and the Kurdish People’s Protection Units (YPG) targets in northern Iraq and Syria.

Ankara considers the YPG a terror group linked to the PKK. But the YPG -- the dominant force within the US-led Syrian Democratic Forces (SDF) is seen as crucial in the fight against the Islamic State (IS) extremist group.

The YPG denied a role in this month’s attack.

A Kurdish military official told AFP that a Turkish drone strike hit a Kurdish position inside a Russian base in northeastern Syria on Wednesday killing one Kurdish fighter and wounding three.

The casualties were all fighters of the Kurdish-led SDF, the SDF officer said.

Erdogan accused Western states backing Kurdish forces in Syria of failing to deliver on their promise of no attacks on Turkish soil, pointing to the Istanbul bombing.

“If they can’t keep their word,“ he said, “then we have the right to take care of ourselves.”

“Turkey has the power to catch and punish terrorists inside and outside our borders who are involved in attacks against our country and nation,“ he said.

Erdogan has repeatedly called for a 30-kilometre (19-mile) “safe zone” to protect Turkey against cross-border attacks from Syrian territory.

On Wednesday, he vowed Turkey would complete the zone “step by step” starting from the towns of Tal Rifaat, Manbij and Ayn al-Arab, also known as Kobane in Kurdish, which are all located in northern Syria.

Kobane, a Kurdish-majority town near the Turkish border, was captured by IS in late 2014 before Syrian Kurdish forces drove them out early the following year.

Turkish Defence Minister Hulusi Akar said the military had hit nearly 500 Kurdish targets across Iraq and Syria as part of its offensive.

“So far 471 targets have been struck and 254 terrorists were neutralised in the operation,“ Akar said.

A British-based monitoring group and Kurdish authorities have reported Turkish drone strikes on many locations in Hassakeh province including a domestic gas plant and an oil pumping station.

Turkish artillery fire also hit near the Jerkin prison in Qamishli, which holds IS group detainees, according to both sources.

Ankara insisted Wednesday that its campaign targeted only “terrorists.”

“I repeat that the only target of the Turkish armed forces are the terrorists and the structures belonging to these terrorists,“ Erdogan said.

“We have no problem with any ethnic or religious group, with our Kurdish or Arab brothers.”