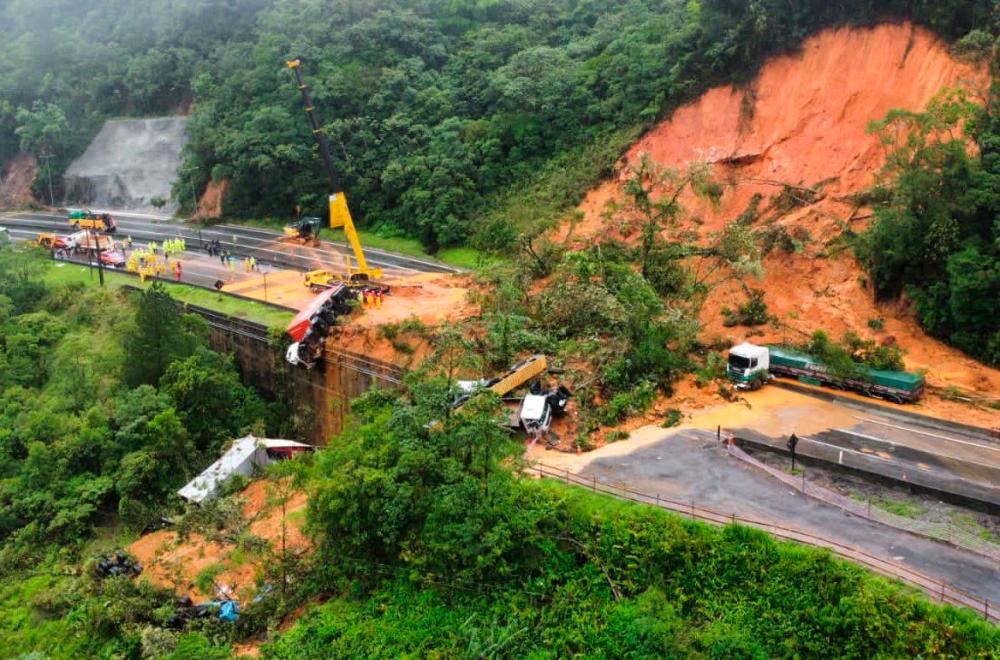 This handout picture released by the Santa Catarina Fire Department shows the BR-367 highway blocked after a landslide in Guaratuba, Parana state, Brazil, on November 30, 2022. AFPPIX

RIO DE JANEIRO: At least two people were killed and dozens more are missing after a landslide ripped across a section of highway in southern Brazil, sweeping some 20 cars and trucks along with it, authorities said Wednesday.

The torrent of mud came rushing down a steep hillside Monday after days of heavy rain in the state of Parana, hitting highway BR 367, officials said.

“It’s hard to know the exact number of victims. A vehicle could have one to five people inside. We’re working with an estimate of 30 to 50 people missing,“ local emergency response chief Manoel Vasco told a news conference.

Aerial images released by the emergency services showed a massive smear of mud that swept away everything in its path -- including a chunk of highway and the vehicles on it.

They are using drones with heat-detecting cameras in hopes of finding survivors.

“Fifty-four firefighters have been working non-stop for more than 35 hours,“ the Parana state security authority said in a statement later Wednesday, noting as well concerns over further landslides.

Two bodies have been found so far, and six survivors have been located, including the mayor of the coastal town of Guaratuba, the nearest city.

“It was horrible. The mountain just fell on top of us. It swept away every last car. We’re only alive by the grace of God,“ the mayor, Roberto Justus, said in a video posted on social media.

At least one other person died Wednesday after a section of road was washed out, sweeping away the victim's car, in the northeastern state of Segipe, Brazilian media reported.

In February, more than 200 people were killed in a series of landslides in the picturesque southeastern tourist town of Petropolis. - AFP