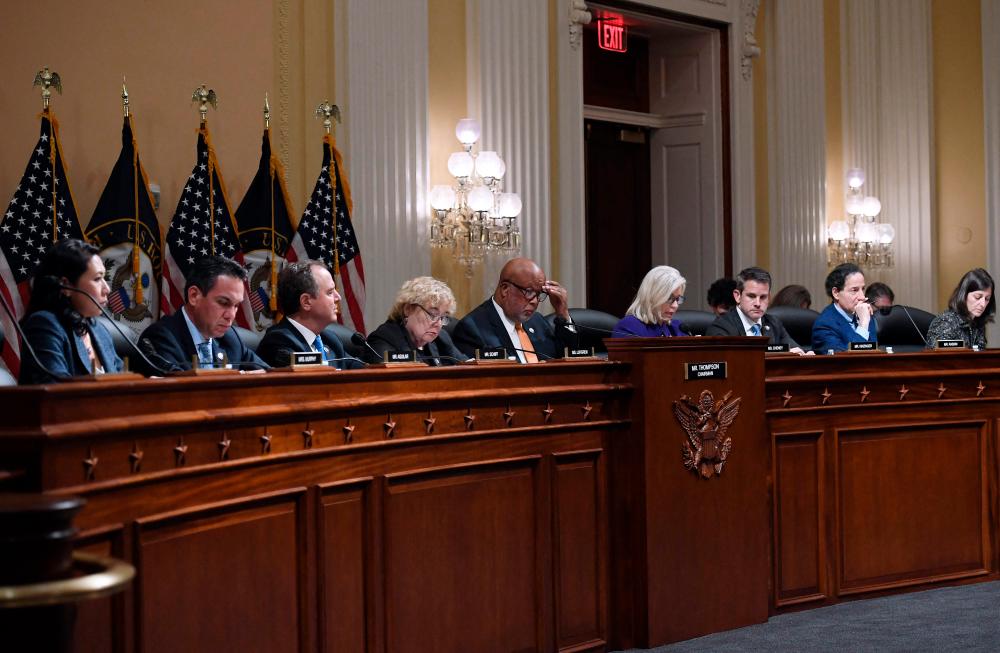 US congressional committee investigating the January 6 attack at the Capitol meet to vote on criminal contempt charges for Steve Bannon, one of former President Donald Trump's closest allies at the Cannon Office Building on October 19, 2021 in Washington, DC. AFPpix

WASHINGTON: Lawmakers investigating the deadly assault on the US Capitol voted unanimously Tuesday to pursue criminal contempt charges for a key ally of former president Donald Trump for refusing to testify.

The right-wing political advisor had told the panel he would be withholding testimony and documents until Trump’s claim of “executive privilege,“ which allows presidents to keep certain conversations with aides secret, had been resolved.

But the nine-member committee said Bannon’s position was not a lawful basis to ignore the order and voted unanimously to adopt a report setting out the case against him.

“Mr Bannon has no legal right to ignore the committee’s lawful subpoena,“ Representative Liz Cheney, vice chair of the committee and one of only two Republican members, said Tuesday during the vote.

Experts believe Trump’s claims that he is entitled to block Bannon giving evidence to investigators are likely baseless, since the presidential “executive privilege” carve-out is not generally understood to apply to former occupants of the White House.

Furthermore, Bannon wasn’t even serving in government at the time covered by the subpoena.

The move paves the way for the Democratic-controlled House of Representatives to vote to refer the 67-year-old former White House chief strategist to the Justice Department to consider charges.

“Mr. Bannon will comply with our investigation or he will face the consequences,“ committee chairman Bennie Thompson said Tuesday.

Thompson warned other witnesses against avoiding future subpoenas, saying: “If you are thinking of following the path that Mr. Bannon has gone down, you are on notice that this is what you will face.”

A timetable for the charging decision has yet to be revealed. If convicted, Bannon would face up to 12 months in prison, but more likely a fine.

The committee is tasked with investigating the violent mob of Trump supporters that ransacked the US Capitol in Washington on January 6 in an attack that left five people dead.

Congress was in session to verify the November 2020 presidential vote, and hundreds of lawmakers and staffers had to evacuate the area.

The rioters had been egged on by Trump, whose fiery speech earlier that day falsely claiming election fraud was the culmination of months of baseless claims about the presidential contest that he lost fairly to President Joe Biden.

“Mr. Trump’s privilege arguments do, however, appear to reveal one thing: they suggest that President Trump was personally involved in the planning and execution of January 6, and this committee will get the bottom of that,“ Cheney said as the committee voted. — AFP

PM: Bumiputera economic empowerment plans to be given priority

The ultimate bootcamp for DJs & creators

2.PM: Bumiputera economic empowerment plans to be given priority