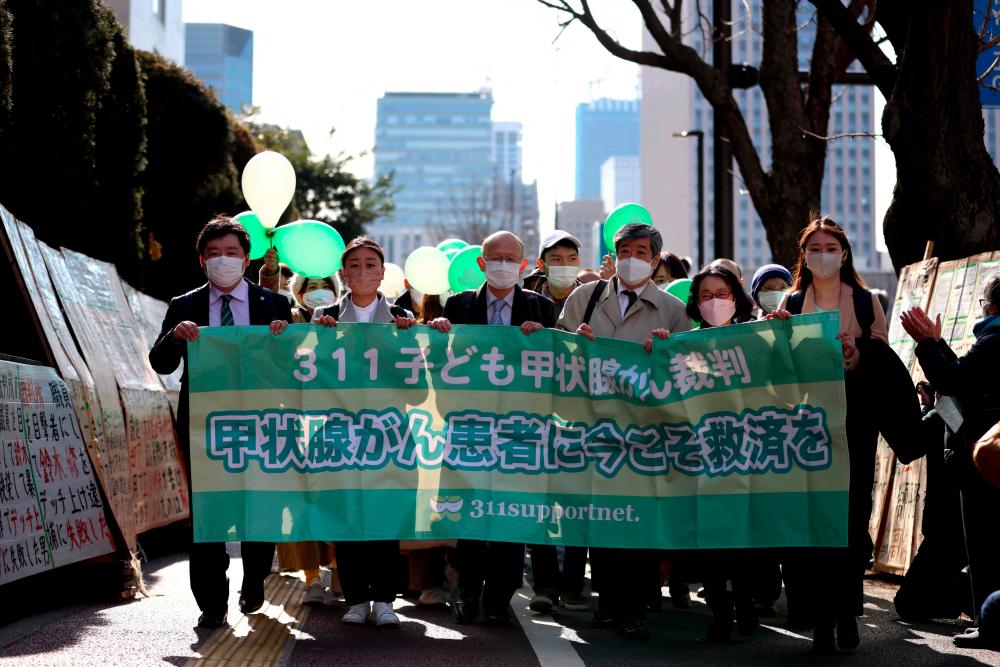 Supporters and lawyers of the six young people who were living in the Fukushima region when the March 11, 2011 tsunami caused the nuclear disaster, arrive in front of the Tokyo district court in Tokyo/AFPPix

TOKYO: Six young people will sue the operator of Japan’s stricken Fukushima nuclear plant on Thursday over claims they developed thyroid cancer due to exposure to radiation after the facility’s meltdown.

The plaintiffs, now aged between 17 and 27, were living in the Fukushima region when a huge earthquake on March 11, 2011 triggered a tsunami that caused the nuclear disaster.

No causal relationship between radiation exposure from the disaster and thyroid cancer has been recognised by an expert panel set up by the regional government, and whether such a link exists could become a focal point of the case.

A United Nations report published last year concluded that the Fukushima nuclear disaster had not directly harmed the health of local residents a decade after the catastrophe.

A higher rate of thyroid cancer detected among children exposed to the radiation was likely due to better diagnostics, the UN’s Scientific Committee on the Effects of Atomic Radiation concluded.

But the plaintiffs’ lawyers say none of the cancers suffered by the group were hereditary, arguing it is highly likely the disease was caused by exposure to radiation.

“Some plaintiffs have had difficulties advancing to higher education and finding jobs, and have even given up on their dreams for their future,“ Ido said.

The plaintiffs, who will file their lawsuit at Tokyo District Court, were aged between six and 16 at the time of the disaster. They were diagnosed with thyroid cancer between 2012 and 2018.

Two of them had one side of their thyroid removed, while the other four had their thyroid fully extracted and need to take hormonal drugs for the rest of their lives.

The meltdown at the Fukushima Daiichi plant was the worst nuclear accident since the 1986 Chernobyl disaster, after which larger numbers of thyroid cancers were detected.

The 2011 disaster in northeast Japan left around 18,500 people dead or missing, with most killed by the tsunami.

Tens of thousands of residents around the Fukushima plant were ordered to evacuate their homes, or chose to do so.

Several workers deployed to the plant contracted cancer after being exposed to radiation, and have received compensation from the government because the cases were recognised as occupational diseases.

Since the disaster, Fukushima prefecture has been conducting screening tests on thyroid glands for roughly 380,000 people who were aged 18 or under at the time of the disaster.

As of June 2021, 266 cases or suspected cases of childhood thyroid cancer had been detected, a local official said.

“When the legal complaint arrives, we will deal with it sincerely after paying attention to the details of the demands and claims,“ TEPCO spokesman Takahiro Yamato told AFP.

“We express our heartfelt apologies again for causing trouble and concern to people in wider society, including residents of Fukushima prefecture, due to the accident.”-AFP 1.British PM to travel to UAE Sunday after president's death