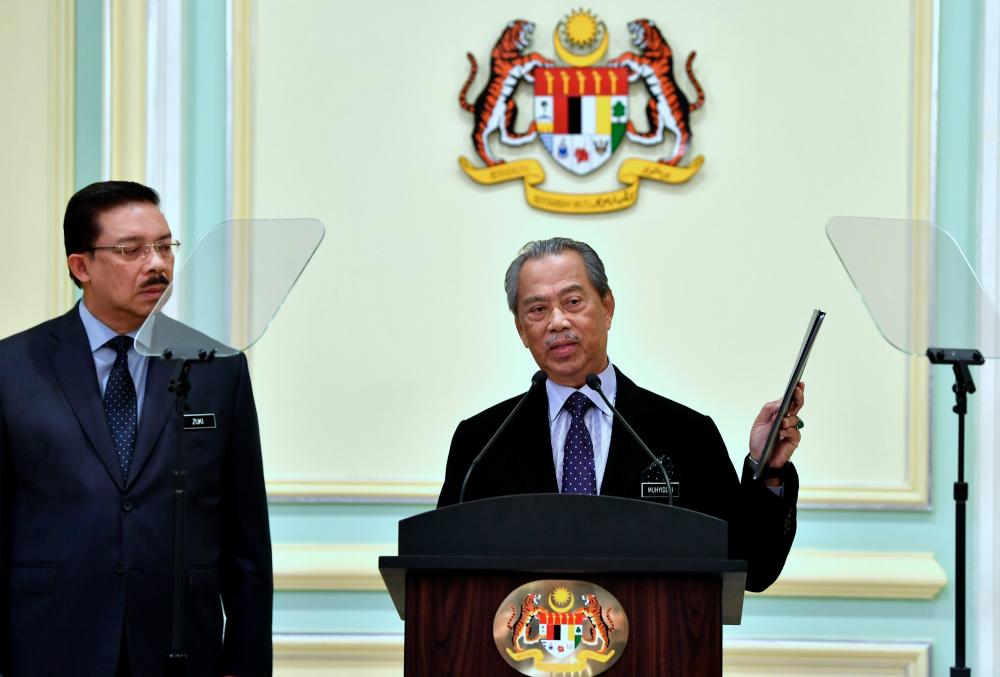 PUTRAJAYA: For the first time in the country’s history, the Cabinet will be without a deputy prime minister.

In its place, four senior ministers have been appointed to assist Prime Minister Tan Sri Muhyiddin Yassin in coordinating the Cabinet, namely on issues concerning the economy, security, infrastructure development as well as social issues and education.

“Their appointments will help to ensure that any issues between ministries in the said fields can be coordinated in an efficient manner. In short, I want to form a Cabinet that can truly provide the best service to the rakyat, a Cabinet that delivers.

“These senior ministers will help me in carrying out my duty as the prime minister, including chairing Cabinet meetings in my absence.

“With the appointment of these ministers, there is no need for a deputy prime minister to be appointed at this moment,” he told a press conference when announcing his Cabinet lineup, here, today.

The post of deputy prime minister has been the subject of scrutiny by many observers, with many speculating which party amongst those in the new federal government would be given the all-important position.

Previously, the longest that the country has gone without a deputy premier was for four months, after Datuk Seri Anwar Ibrahim was sacked from the position by then premier Tun Dr Mahathir Mohamad on Sept 2, 1998.

Muhyiddin said his Cabinet would be one that focuses on the rakyat, is effective and of integrity, and comprises the likes of experienced politicians, technocrats and professional individuals.

Muhyiddin said they would first be appointed as senators before they can carry out their duties in the Cabinet.

The premier added that he has restructured several ministries “in line with current needs”, including reintroducing the portfolio of Higher Education Minister, which would be helmed by Umno’s Datuk Noraini Binti Ahmad, who is the current Public Accounts Committee chairman.

He also introduced a new portfolio to look after Sabah and Sarawak Affairs, with Parti Bersatu Sabah (PBS) president Datuk Seri Dr Maximus Johnity Ongkili appointed as the Minister in the Prime Minister’s Department in charge.

The new Cabinet is considerably larger than that of Pakatan Harapan (PH), with a total 31 ministers and 38 deputies.

Umno holds the most ministerial positions with nine, followed by Bersatu (7), Gabungan Parti Sarawak (4), PAS (3), PBS (1) and five others, which include Azmin, Zafrul and Zulkifli.

Muhyiddin said all the ministers and deputy ministers have also been screened by both the Malaysian Anti-Corruption Commission (MACC) and the police to ensure they were of integrity.

In an immediate reaction, the Women’s Aid Organisation expressed disappointment that women continue to be under-represented in the government.

“The rakyat voted for reforms and in the past two years, various reforms have been developed and were close to being tabled in Parliament. The new Cabinet must tell us how they intend to continue these efforts.”

Political analyst said Khoo Kay Peng said while Muhyddin’s decision to not have a deputy prime minister was a positive move for the coalition, there must be a clear line of leadership to decide who sits in for the prime minister when he is away.

“If anything happens to the prime minister, a clearly decided ‘number two’ must be able to take over and enjoy the full confidence of Parliament,” he told theSun.

Lawyer Kokila Vaani Vadiveloo said there is no mention in the Federal Constitution of a requirement to appoint a deputy prime minister.

Thailand to cease Sinovac vaccine use when stocks end this month

5.Thailand to cease Sinovac vaccine use when stocks end this month