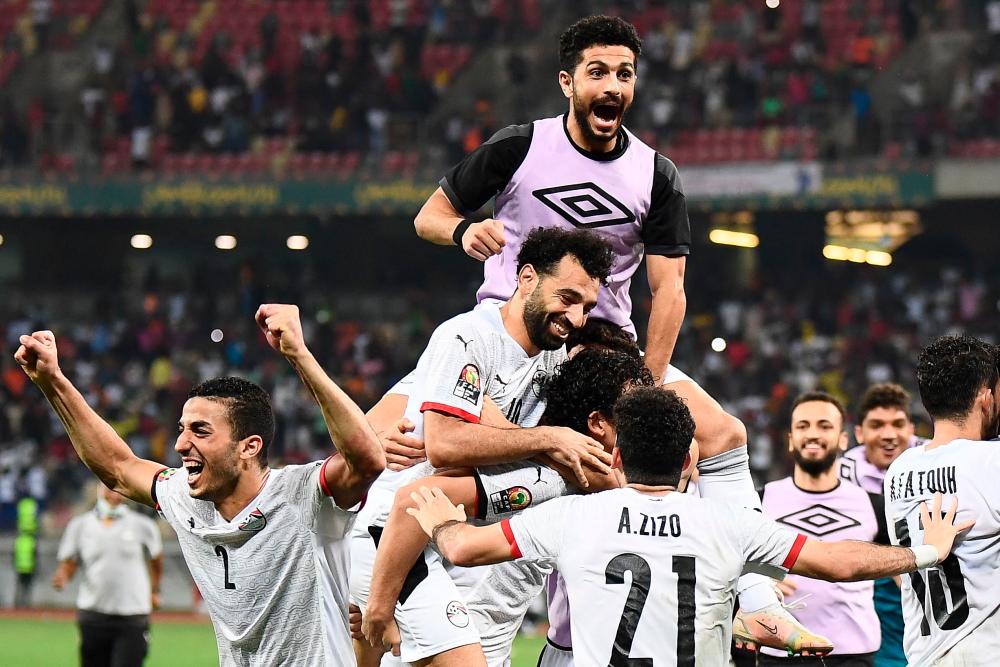 TOPSHOT - Egypt’s forward Mohamed Salah (C) celebrates with teammates after winning the Africa Cup of Nations (CAN) 2021 round of 16 football match between Ivory Coast and Egypt at Stade de Japoma in Douala on January 26, 2022. AFPPIX

DOUALA: Mohamed Salah scored the decisive penalty as Egypt beat the Ivory Coast in a shoot-out on Wednesday to advance to the Africa Cup of Nations quarter-finals, while organisers of the troubled tournament moved two matches away from Douala to Cameroon's capital Yaounde.

The Liverpool star smashed home his spot-kick with the Ivory Coast's Eric Bailly the only player to miss in the shoot-out in Douala, which Egypt won 5-4 after the last-16 tie finished goalless at the end of extra time.

Egypt, the record seven-time continental champions, go on to play Morocco in the last eight in Yaounde on Sunday.

Carlos Queiroz's team are through to the quarter-finals despite having scored just twice in their four matches in Cameroon so far.

“Sometimes penalties are a lottery and they are, but today I think the best team on the pitch was rewarded with the penalties at the end. Today was our day,“ said Queiroz.

This was their 11th AFCON encounter and still Egypt have lost just once to the Elephants -- among their many successes against the Ivory Coast was their victory on penalties in the 2006 final.

“I can’t really reproach the players. It’s not as though they missed every penalty. It was just decided by a little detail,“ said Ivory Coast coach Patrice Beaumelle.

The quarter-final line-up was completed by Equatorial Guinea, who stunned Mali 6-5 on penalties after a drab 0-0 draw in the late game in Limbe.

Santiago Eneme scored the decisive penalty before Malian Falaye Sacko had a kick saved by Jesus Owono as his country bowed out in the first knockout stage for the second successive Cup of Nations.

Liverpool superstar Salah was the main attraction in Douala, where fans cheered every time his face appeared on the big screen, but he sometimes struggled on the bobbly pitch at the Japoma Stadium.

After much speculation, the Confederation of African Football confirmed that the last two matches scheduled to be played there would be moved to the Ahmadou Ahidjo Stadium in Yaounde.

CAF president Patrice Motsepe had already said Tuesday that the quarter-final due to be played at the Olembe Stadium in Yaounde would also be switched to the Ahmadou Ahidjo Stadium after a deadly crush which killed eight people.

The additional moves are “not related to security issues but motivated by the state of the pitch at Japoma,“ a CAF official told AFP under cover of anonymity.

The last quarter-final on Sunday, between Senegal and Equatorial Guinea, and the first semi-final scheduled for February 2, are the matches concerned.

The decision to shift the other quarter-final match away from the 60,000-seat Olembe Stadium was made official Wednesday after Motsepe hosted a meeting with tournament organisers.

“The next match that was scheduled for the Olembe Stadium will not take place until CAF and the Local Organising Committee have received the full report of the Investigation Committee (into the Olembe incident) indicating the circumstances and events that led to the injury and death of spectators at the Olembe Stadium,“ CAF said in a statement.

The second semi-final, to be played February 3, and the February 6 final are still scheduled at Olembe Stadium for the time being.

“The CAF AFCON Organising Committee also requires the assurance and guarantee that appropriate and adequate interventions and measures have been implemented to ensure that a similar incident will not occur,“ the statement added.

Motsepe said on Tuesday that an “inexplicable” decision to keep an entry gate closed was responsible for the crush which killed eight people and injured 38 before a match between hosts Cameroon and the Comoros.

Crowds at all venues had been officially limited to 60 percent of capacity for the tournament because of the pandemic, but the cap is raised to 80 percent when Cameroon play.

The decision to move matches from Douala, meanwhile, is a blow to the country's economic capital.

The stadium, which was built for the tournament and cost a reported $230 million, will host its final game on Saturday when Cameroon play Gambia.

The other quarter-final, between Tunisia and Burkina Faso, will be played in the northern city of Garoua. - AFP