After a five-year hiatus, Gary Chaw’s fervent spirit showed on stage as he wielded the power of music for his fans 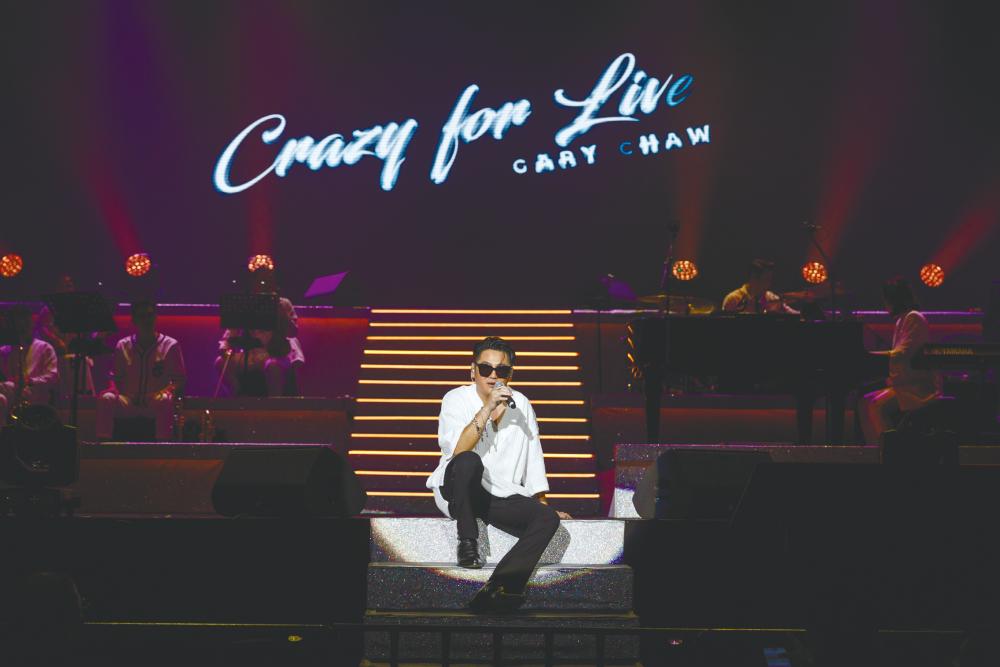 After a lengthy hiatus and a worldwide pandemic, Chaw was back to wow the fans.

PRESENTED by MK Group and organised by Star Planet, Gary Chaw’s Crazy for LIVE concert in Malaysia was held on Nov 12 at Genting’s Arena of Stars, drawing an audience of nearly 5,000 people.

This concert is the second collaboration between Star Planet and Chaw after Gary Chaw’s Sensation World Tour Live in Malaysia 2011. After a five-year hiatus and a worldwide pandemic, Chaw was back to wow the fans.

Instead of a pre-recorded background instrumental, the concert featured a band of 13 talented musicians from all over Malaysia.

Chaw himself is from Kota Belud, Sabah, and music director Lee Sze Wan, – who also played the piano – is from Ipoh. The band was made up of orchestral instruments as well as traditional instruments such as sitar, Malay percussions, and guzheng.

In a press statement, Lee pointed out that the biggest challenge was figuring out how to integrate Asian and Western instruments together throughout the music arrangement.

In addition to Chaw’s high music specifications demand, she also had to make sure that the instruments’ sounds melded well live.

Besides the band, the stage design was also carefully crafted by a fully-Malaysian team. The performance and the design made the live music a truly wonderful and magnificent 120 minutes of pure auditory enjoyment.

The concert was titled Crazy for Live, a reference to Chaw’s fervent spirit on stage and the power music has had on him over the years.

In a press statement, Chaw expressed that he hoped that the concert will bring positive energy to his fans and that in the near future, he will be able to perform in other cities in Malaysia and hopes to bring along his fellow Malaysian musicians to go on tour around the world.

For his first song, he started off strong with a cover of Half Moon Serenade by Hacken Lee, a famous Hong Kong singer of the 80s. That went on to be the theme of the concert, as Chaw also noted in the press statement that his new album Crazy for Music was inspired by Canto-pop songs of the 80s and 90s which he grew up with.

The songs of the golden age of Cantopop have a special place in his heart, Chaw told the crowd during the performance, talking about how he used to watch Hong Kong Cantonese dramas growing up with his grandpa.

Inspired by his childhood, he sang I Would Take Your Place, a song from the 90s Hong Kong gangster film series Young and Dangerous, and a medley of four songs including George Lam’s I Need You Every Minute, Sam Hui’s Drifter’s Song, Frances Yip’s iconic Shanghai Bund, the happy-go-lucky theme song of Aces Go Places (a Hong Kong James Bond parody film series), and Kinship.

Known for his impressive and androgynous vocal range, he also covered songs of 80s Cantopop songs sang by female Hong Kong artistes, including Silly Girl by Priscilla Chan – his first attempt at covering the song – and Love is Over by Anita Mui.

Before Chaw came on stage, the introduction was a recording of his fans talking about when they started listening to Chaw’s music and became his fans. That set the mood for the rest of the concert, and he made sure to talk to the audience to entertain everyone in the usual playful ‘Brother Cao’ style, including having funny banter with fans who yelled loud enough.

During his cover of The Lonesome Man by Jacky Cheung, Chaw wore a dazzling white suit and came out from a side entrance and walked into the audience, giving his fans a close-up view.

One lucky fan even had her dream come true as he held her hand while Chaw sang the song for everyone.

While performing Every Sentence You Said by Tai Chi, a compilation video with pictures of him and his friends and team members who supported him over the years played behind the star.

Among his many outfits, Chaw was also in a glittery black suit, wowing the crowd with his high notes for the melancholy break-up songs.

From his recent album which was released last month, Chaw performed his two new Cantopop songs, Just Another Day and Precious Lover.

According to Chaw, the piano-led Just Another Day was an emotional song as it evoked painful memories for him. When watching Chaw perform, you can really see that he pours his heart and soul into it as he shed his tears on stage.

He even addressed his tumultuous relationship with his wife, admitting to the audience that he’s “not okay”, and told the audience how much he appreciated them “accepting him for who he is”.

He also said that he’s matured over the years, and even talked about the lessons he’s learnt.

For the finale before the encore, he sang Sky by Beyond with a fanfare-type instrumental.

After that was the long-awaited encore, where he performed his fan-favourite songs from the early 2006 album, Superman.

During the mashup of Superman and 3-7-20-1, he greeted even the fans in the general seats, telling them to take their chance getting selfies with him.

After that, he sang Betrayal before finally performing the Gary Friend Club theme song, Only You in My World, which ended with a golden confetti explosion.

When everyone thought that was the final ending, he surprised everyone when he whispered to the band to play one final secret song.

“And now the end is near, and so I face the final curtain,” Chaw sang. It was none other than Frank Sinatra’s My Way, and that, indeed he did, end the concert, his way.

From the applause, you could easily tell that the crowd enjoyed his performance. While leaving, I even overhead a fan saying that it was worth coming up to Genting for Gary, and Crazy for Live was definitely a night to remember for the fans.

4.NanoMalaysia introduces Bicep to promote use of biomass for sustainable agriculture

5.PM: MOF, Cabinet will have opportunity to improve Budget 2023