Love on the track at the Paralympics 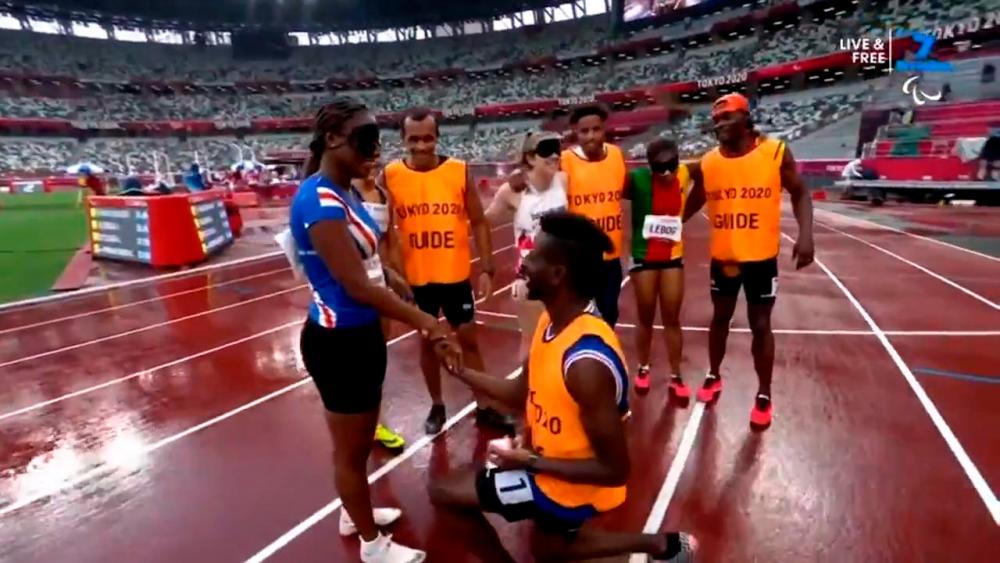 In this screenshot of the live video broadcast, Keula Nidreia Pereira Semedo is proposed to by her guide Manuel Antonio Vaz de Vega following her event.

SHE may have missed out on a chance at a medal, but one athlete at the Tokyo 2020 Paralympics walked away with so much more this morning.

Cape Verde athlete Keula Nidreia Pereira Semedo, who was competing in the women’s 200m T11 event, had just finished last in her heat.

She missed out on qualifying for the semi-final, but had managed to run a season best of 33.04s.

However, she received a surprise when her guide Manuel Antonio Vaz de Vega immediately called over her fellow competitors and their guides, and dropped to his knees before her to propose.

The other guides delightfully explained the situation to their T11 athletes – all of whom are visually-impaired – so that they could share in the joyous occasion.

The stunned Pereira Semedo immediately said “Yes!” to the proposal, drawing cheers and claps from everyone in the stadium, and the happy Pereira Semedo later showed off her new engagement ring for the cameras.

This is not the first Games-related proposal that Tokyo has seen this year. During the recent Tokyo Olympic Games in July, Argentine fencer Maria Belen Perez Maurice also became engaged to her longtime partner and coach, Lucas Guillermo Saucedo soon after losing her women’s sabre event.

It appears that no matter what the result, the Games have a way of turning people into instant winners.

We send our best wishes to both the happy couples!

SC: Lawyer’s acquittal won’t affect another case against him

1.Pfizer booster dose to be given to Sinovac vaccine recipients