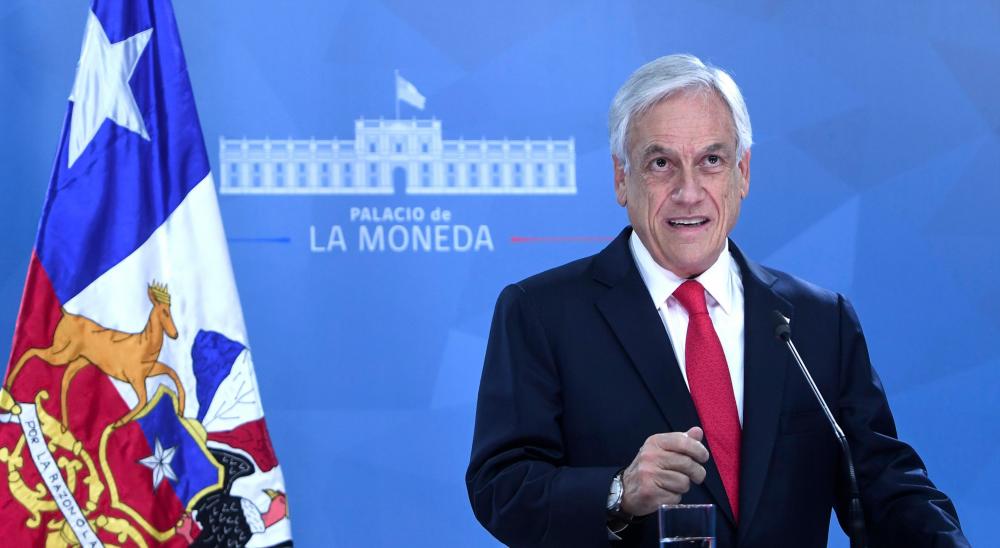 Handout picture released by the Chilean Presidency showing Chilean President Sebastian Pinera speaking to the nation in Santiago, on Oct 22, 2019, on a fifth straight day of protests against a now suspended hike in metro ticket prices. — AFP

SANTIAGO: Chilean President Sebastian Pinera announced a package of social measures Tuesday aimed at stemming days of protests over economic inequality that have swept the country and claimed 15 lives.

Apologizing to the nation for failing to anticipate the outbreak of social unrest, Pinera said his government had “received with humility and clarity the message Chileans have given us.”

The leader vowed to increase the universal basic pension by 20%, cancel a recent 9.2% increase in electricity bills and propose a law that would see the state cover the costs of expensive medical treatment.

“I recognize this lack of vision and I apologize to my compatriots,“ Pinera said in an address from the presidential palace in Santiago.

Pinera also pledged a state subsidy to increase minimum wage to 350,000 pesos (RM2020.54) a month and said the government would introduce health insurance for medication, which is among the most expensive in the region.

Earlier in the day he met with the leaders of some of Chile’s opposition parties as he sought a way to stem the country’s worst violence in decades, initially triggered by an increase in metro fares.

The protests, which began Friday, mushroomed into a broader outcry against social and economic woes, including a yawning gap between rich and poor, in a country normally considered one of the most stable in Latin America.

Pinera quickly suspended the metro fare hike, but also declared that Chile was “at war against a powerful, implacable enemy,“ and imposed a state of emergency in Santiago and most of Chile’s 16 regions.

Adopting a more conciliatory tone, he later called for Tuesday’s meeting, which was boycotted by three of the largest opposition groups, including the powerful Socialist Party.

The day’s protests were mostly peaceful, particularly in the capital, although looting continued in other towns.

But with the country’s largest union, the Workers’ United Center of Chile (CUT) alongside 18 other social organizations, calling strikes and protests for Thursday and Friday, the pressure had been on Pinera to act.

The protest violence — widespread looting, arson and clashes with the 20,000 security forces deployed on the streets — is the worst to hit Chile since the country’s return to democracy after the 1973-1990 rightwing dictatorship led by General Augusto Pinochet.

On Tuesday the army announced a nighttime curfew — from 8pm to 5am — for the fourth day in a row.

Chile’s big business conglomerates are one of the major factors in the huge wealth disparity that has angered protesters.

A 55-year-old man taking part in Monday’s protests, who gave his name only as Orlando, told AFP that low salaries and pensions, waiting lists at hospitals and high prices for medicine, were the true reasons for the protests.

The government started naming some of the dead on Tuesday. Nine had died in fires, one was electrocuted and five were shot, four of those by the security forces.

Eleven of the fatalities were in the Santiago region, while a Peruvian and Ecuadorian were among the dead.

Chile’s human rights institute said more than 200 people had been taken to the hospital, almost half with gunshot wounds, while many others suffered eye injuries from pellets.

Since the unrest began, more than 2,600 people have been detained.

Tuesday saw almost none of the violence, looting or torching of public property and private businesses that marked the first few days of protest.

However, television images showed looters in one town smashing a bus into a department store before ransacking it.

In central Santiago, many shops and businesses that were closed on Monday reopened. Commuters and shoppers formed long lines at bus stops and supermarkets.

Only one of the Santiago metro’s seven lines — which normally carry three million people a day — was operational, although a fleet of 4,300 public buses took up much of the slack.

Around 50 schools and 10 universities in the capital remained closed on Tuesday but hospitals and clinics operated normally.

Chile’s football association said it was suspending its professional leagues for a second successive weekend.