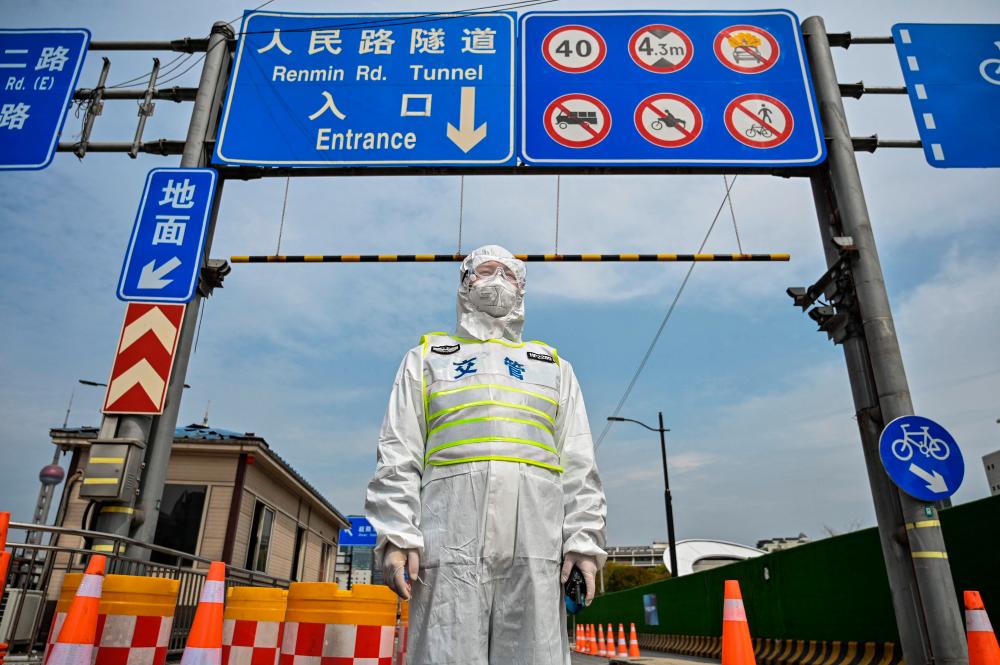 (FILES) In this file photo taken on March 28, 2022, a transit officer wearing protective gear controls access to a tunnel in the direction of the Pudong district in Shanghai under lockdown as a measure against the Covid-19 coronavirus. AFPPIX

Hard lockdowns, mass testing and tight border controls had for two years batted back the virus and led to relatively few deaths in the world's most populous nation.

While much of the Western world suffered huge outbreaks, China’s “dynamic zero-Covid” approach was upheld as an emblem of Xi’s shrewd leadership and celebrated during the ruling Communist Party’s centenary last year.

Fawning television specials and orchestrated ceremonies placed Xi in the foreground as avuncular, wise and in complete command of a Chinese success story.

But as he bids for an unprecedented third term in power at this autumn's party congress, a virus wave driven by the Omicron variant is posing awkward, unexpected questions.

Hundreds have died, according to official figures, mainly in Shanghai where the population has seethed at a lockdown that is only partially easing after nearly two months.

Beijingers fear they may be next, while economic dynamos from Jilin to Shenzhen have been jammed up by restrictions with the economy losing puff.

Still, Xi says the country should “unswervingly” pursue zero-Covid, insisting Chinese lives are worth more than the economic pain.

But the officious enforcement of virus controls has stirred anger and derision, especially in Shanghai where sardonic memes rip across the internet and scuffles with hazmat-clad officials have been seen on the streets.

But Xi has bet too much on zero-Covid to step back now, experts say.

“Challenging this policy means challenging him,“ said Alfred Wu, associate professor at the Lee Kuan Yew School of Public Policy at the National University of Singapore.

It is a pivotal year for Xi.

China's establishment are expected to wave him through for a third term as party leader when they meet for the 20th Party Congress in Beijing to elect the country's top decision-makers.

While the sudden unravelling of Beijing's Covid narrative presents a challenge, experts say it is unlikely to derail his bid to rule China indefinitely.

“He has already very much consolidated his power base through anti-corruption and other campaigns,“ Wu said.

Xi's priority is instead to preserve the status quo in the run-up to the congress, he added.

China has so far been spared the deaths that have scarred most other major countries, boosting the credibility of zero-Covid.

Top leaders -- notably Premier Li Keqiang -- are stepping forward to reassure that the economic drag of Covid-19 controls will be temporary.

Li said on Wednesday that local governments should step up their “sense of urgency” in fixing the economic malaise, days after the country posted its lowest retail sales and factory output in months.

His prominence has spurred speculation of a rift or challenge to Xi's authority from party factions unhappy at the virus-driven slump.

Others caution against reading too much from the information spoon-fed to the public by a Communist Party schooled in secrecy and storytelling.

“Li may have been empowered by Xi himself to execute a course correction,“ said Joseph Torigian, an expert in elite politics from the American University.

There is a powerful political dimension to the zero-Covid policy.

Party careers are dependent on success in stifling outbreaks and officials have been sacked or reprimanded for failures to control the virus as the authority of Xi reaches across the country.

The chaotic lockdown of Shanghai has drawn into question the fate of the city's Communist Party secretary Li Qiang, long seen as one of Xi's top picks for premier once Li Keqiang retires.

But “as long as Xi is in office and has sufficient political strength, Li Qiang has a good chance of joining the Politburo Standing Committee”, analysts from the SinoInsider consultancy wrote, referring to a select group of top Chinese leaders.

Rumblings of divisions and behind-the-scenes moves are easily overblown but not always incorrect, say Beijing watchers.

“Like most governing parties around the globe, the CCP naturally and continuously works very hard to present itself as thoroughly unified in purpose,“ Shue said.

“And also like most governing parties around the globe, the CCP is in reality just about always... beset by very consequential internal differences over party policy.”

With Xi welded to zero-Covid, experts say it is hard to see how he can abandon the policy without some loss of political capital.

But the congress is still likely several months away and it is premature to calculate any damage to China's most powerful leader since Mao.

“It is hard to judge whether top party elites have different views on zero-Covid,“ said Torigian.

Besides, he added, “Chinese politics are not a popularity contest.” - AFP