Ousted and outspoken: The lady taking on The Lady in Myanmar 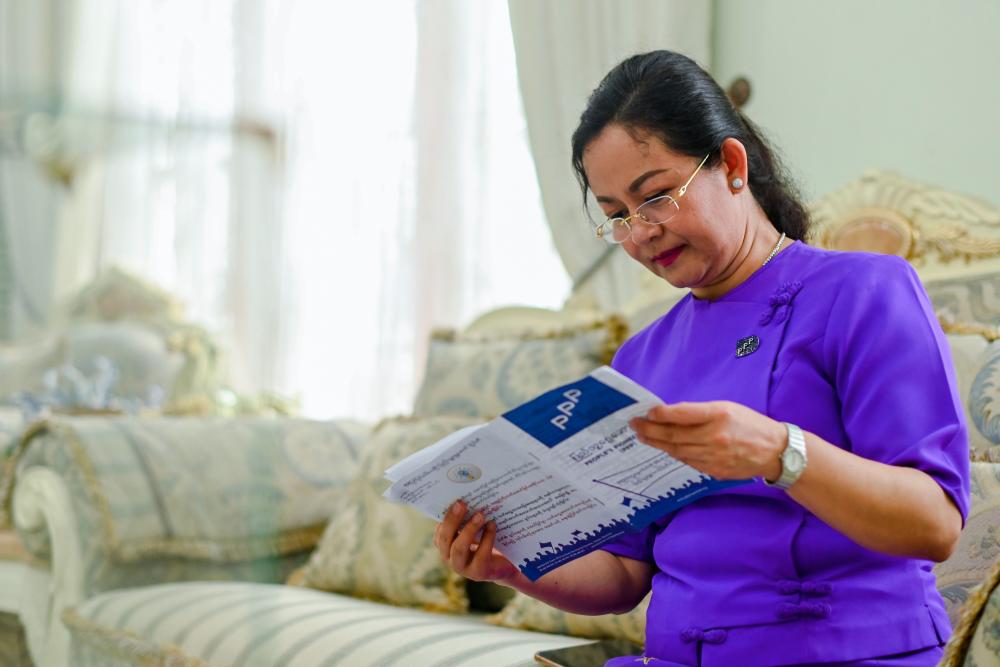 This photo taken on Aug 26, 2020 shows Thet Thet Khine, chairman of the People’s Pioneer Party (PPP), posing for a photo during an interview in her house in Yangon. — AFP

YANGON: Booted from Aung San Suu Kyi’s “chaotic and autocratic” party, one female MP is now taking on Myanmar’s national heroine in the upcoming election, claiming the country needs to work with, not against, a military accused of genocide.

Voters are expected to return Suu Kyi’s National League for Democracy (NLD) party to power at the Nov 8 polls — only the second since the country emerged from decades of outright military rule — but Thet Thet Khine is still hoping to make her mark.

She has undergone many incarnations, from student activist to medical doctor then businesswoman and jewellery magnate — before being elected as an NLD MP at Suu Kyi’s side in 2015.

But she has since fallen from grace.

Ousted from the NLD last year — she says for speaking her mind — the 53-year-old hopes to entice voters to her People’s Pioneer Party (PPP).

“The NLD is no longer the solution for the country,“ she tells AFP at her Yangon mansion, decorated with neoclassical columns, chandeliers and gold-trimmed furniture.

“The way the party is run is very chaotic and very autocratic,“ she says, claiming loyalty is valued over competence, and that there is a culture of micro-management and an overriding fear of upsetting The Lady.

“One person makes all the decisions.”

There is widespread disillusionment with the NLD in many ethnic minority areas, but the party boasts a loyal fanbase in the dominant Bamar heartlands.

And, for many, Suu Kyi embodies the NLD.

She leads the government as state counsellor, holds the reins to international relations as foreign minister and has been front and centre in the country’s fight against coronavirus.

Thet Thet Khine says speaking out publicly, has meant she and relatives have faced online abuse.

As a medical student, she joined the pro-democracy movement that swept the country in 1988 before it was brutally suppressed by military force.

The protests also propelled to fame Suu Kyi, who was “so special to us,“ she remembers.

After the crackdown, she chose business but returned to politics after the country emerged from military rule.

Now head of her own party in a fiercely patriarchal society, she describes a collective leadership in her relatively youthful PPP, where the average candidate’s age is 46.

The party promises more jobs, higher wages and lower taxes although gives few details about how this would be financed.

It seems to be targeting a broad demographic, fielding Myanmar’s first openly gay candidate, one Muslim nominee and one hardline Buddhist, known for his Islamophobic stance.

“Few politicians understand the business world so that’s a plus for her,“ says Yangon-based analyst Khin Zaw Win.

One priority is bridging the rift between the civilian government and military, a strained relationship mirrored by that of Suu Kyi and army chief Min Aung Hlaing.

“If the father and mother are fighting...the kids don’t know what to do,“ Thet Thet Khine explains, adding the military is “part of the solution” in the state-building process.

Under a constitution it scripted, the armed forces retain immense powers, holding three key ministries and a quarter of all parliamentary seats — giving it an effective veto on legislation.

But half a century of brutal junta rule has left many deeply suspicious of a military that jailed thousands for their beliefs, subjugated ethnic minorities and oversaw steep economic decline.

“They made a lot of wrong decisions and did a lot of mismanagement in the past,“ she admits but insists the new generation of soldiers are “embracing professionalism”.

Allying herself with the military will mean “she’ll lose a certain amount of support”, predicts Khin Zaw Win — who puts the tactic down to pragmatism.

“She needs something to lean on.”

In 2017, Rohingya Muslims recounted widespread murder, rape and arson in military operations that now see the country charged with genocide at the UN’s top court — a trial Thet Thet Khine claims is “unnecessary”.

The military “maybe overreacted...but it’s not genocide or ethnic cleansing”.

Rohingya ancestry has been evident for centuries in Rakhine, but they are widely seen as illegal interlopers.

The Rohingya “will never be indigenous”, she says but concedes those whose families migrated more than three or four generations ago should have been accepted.

“They should have citizenship and therefore (face) no more discrimination”.

Instead, virtually all the 600,000 Rohingya remaining in Myanmar will be disenfranchised in this election, just like the last.

Their plight is not a priority for most parties, including the PPP.

Running in under a third of constituencies, Thet Thet Khine says she would be happy to clinch five percent of seats, admitting this is a dry run for the 2025 election when Suu Kyi will be 80.

Suu Kyi “doesn’t believe in a succession plan, so after her era...the NLD will go bankrupt in business terms.”

“But I think she will hold onto power until her last day.” — AFP

Price control scheme: KPDNHEP to step up enforcement till Dec 31

1.Price control scheme: KPDNHEP to step up enforcement till Dec 31