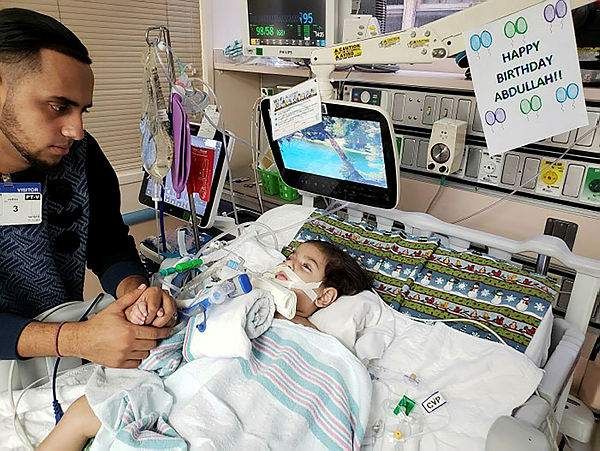 This photo courtesy of the Council on American-Islamic relations in Sacramento shows the young Abdullah Hassan on life support at UCSF Benioff Children’s Hospital in Oakland on Dec 16, 2018 with his father, Ali. — AFP

SAN FRANCISCO: A mother from Yemen was granted Tuesday her wish to see her dying toddler one last time in the United States, which agreed to issue her a waiver from its ban on citizens from several Muslim-majority countries.

Two-year-old Abdullah Hassan, a US citizen like his father, suffers from a rare genetic brain condition and is on life support in a hospital in Oakland, California.

But his mother, Shaima Swileh, had been unable to join him due to President Donald Trump’s order barring visitors from six countries including Yemen.

After a tearful televised plea from the boy’s father prompted public outrage, the US embassy in Cairo issued a visa for Swileh, who has been living temporarily in Egypt.

She will arrive in San Francisco late Wednesday, according to the Council on American-Islamic Relations, the Muslim civil rights group that assisted the family.

“This is the happiest day of my life,“ her husband, Ali Hassan, said in a statement.

“This will allow us to mourn with dignity.”

Hassan said he had been ready to take his son off life support last week after doctors said the case was terminal, with his wife only receiving automated replies when inquiring with US authorities on her visa application.

The Council on American-Islamic Relations launched a campaign that it said prompted 15,000 emails to elected officials as well as thousands of tweets.

Abdullah’s grandfather earlier told the San Francisco Chronicle that Swileh was crying every day as she wanted to see her son “one last time.”

“To hold him for at least a minute. She’s not going to see him forever,“ he said.

Representative Barbara Lee, a Democrat who represents Oakland and took up Swileh’s case, had described denying the mother a visa as a level of cruelty that “takes my breath away.”

She voiced relief at the waiver but added: “So many families are still torn apart by the heinous travel ban.”

But he said that visas are “decided on a case-by-case basis” in accordance with US laws.

The State Department is “ensuring the integrity and security of our country’s borders and at the same time making every effort to facilitate legitimate travel to the United States,“ he told reporters.

“These are not easy questions.”

But such exceptions to Trump’s ban are exceedingly rare. The American Civil Liberties Union, which opposes Trump’s order, said that only two percent of applicants have been granted waivers.

Trump vowed during the 2016 campaign to ban all Muslims from entering the United States, despite constitutional protections of freedom of religion, after a mass shooting in California by a couple of Pakistani descent.

In an executive order that triggered chaos before court challenges and revisions, Trump blocked new visas to nearly all citizens of five Muslim-majority countries — Iran, Libya, Somalia, Syria and Yemen — as well as North Korea and some officials from Venezuela.

A divided Supreme Court in June upheld the ban, which it said was within the president’s powers. — AFP