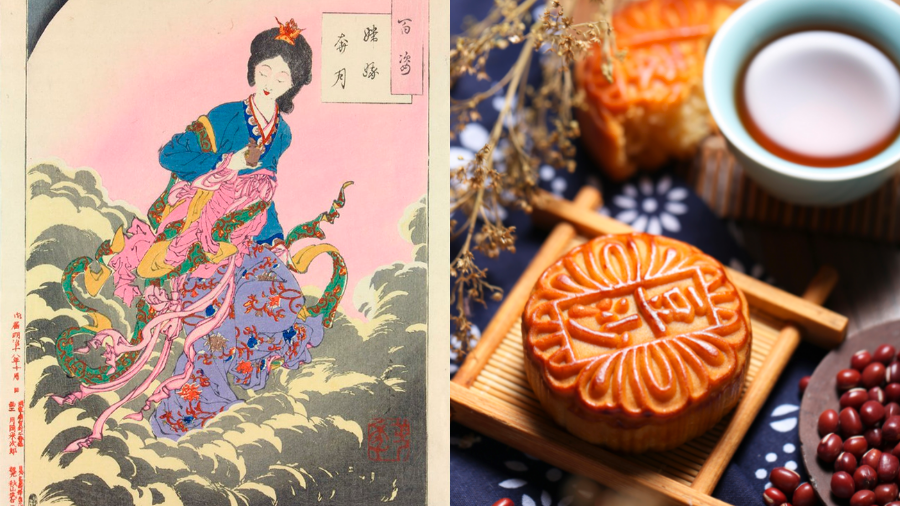 The Mid-Autumn Festival, also known as the Mooncake Festival or Lantern Festival, comes with many interesting legends which still captivate the imagination of many young children today. Here are some of the favourite tales told during family reunions on this special festive day.

The Legend of Chang’e

The story of how the Moon Goddess, Chang’e, came to be is the most popular legend told each year. A long time ago, there were ten suns in the sky. The extreme heat on Earth made it hard for many people, especially farmers, to plant and harvest crops.

One day, a skilled archer named Hou Yi decided enough was enough, and raised his bows to the heavens to shoot down the suns. He managed to shoot down nine suns.

For his heroic deeds, the goddess Xiwangmu rewarded him with an elixir of immortality, a prize typically reserved for immortals who achieved enlightenment. If a person drank the elixir, they would ascend to heaven and become a god.

Since the miraculous elixir was only enough for one person, Hou Yi did not want to abandon his wife Chang’e for the sake of immortality, so he entrusted her to keep the elixir safe.

One day, while Hou Yi was out hunting, his apprentice named Pengmeng broke into the house and demanded that Chang’e hand the elixir over.

Knowing she couldn’t defeat Pengmeng, Chang’e swallowed the elixir out of desperation. Upon realising what she had done, she decided to fly to the Moon so she won’t be too far from Hou Yi on Earth.

A heartbroken Hou Yi missed her a lot and he often stared up the moon every night. He thought of how lonely Chang’e must have felt.

To keep her company, Hou Yi laid out her favourite food every night without fail, until the day he died. The tradition still continues today with people leaving annual offerings to Chang’e, the Moon Goddess, during the Mid-Autumn Festival.

A modern retelling of the legend of Chang’e is told in the animated film, Over the Moon.

The Legend of the Jade Rabbit

Three immortals came down to Earth and reincarnated themselves into three poor, elderly people. They came upon a fox, a monkey and a rabbit and asked for some food.

The fox expertly caught a fish from a stream and the monkey climbed up the nearby trees and plucked some fruits.

However, the poor rabbit had nothing to offer and said to the immortals: “You can eat me,” and jumped into the fire.

The immortals were so moved by this act, that they decided to send the rabbit to the moon to become the immortal jade rabbit.

The jade rabbit now resides at the Moon Palace to accompany Chang’e, and helps to make immortal medicine for those living in heaven.

In other versions of the legend, the immortals decided to honour the rabbit’s selfless deed by placing the rabbit’s image on the moon for all to see. The image of the rabbit on the moon is said to be grey, because it’s seen through the smoke of the fire from that fateful night.

Long ago during the Yuan Dynasty, people were tortured by the cruel government, prompting a nationwide rebellion.

A peasant named Zhu Yuanzhang united the different resistance forces but found it difficult to pass on messages due to government raids.

Liu Bowen, a strategist in Zhu’s troop, came up with a brilliant plan to hide notes in mooncakes with the message to attack on the night of Mid-Autumn Day and distributing the treats to their rebel forces.

The uprising was successful and in celebration, Zhu ordered moon cakes to be served to his subjects and the people.

The practice of eating mooncakes in celebration has been practiced for centuries and still continues today. Zhu Yuanzhang went on and founded the Ming dynasty.

The Legend of Li Longji

One fine night, Emperor Li Longji was appreciating the moon during the Mid-Autumn Festival with a Taoist master and a Taoist priest.

During one of these nights, he voiced his thoughts to visit the Moon Palace. The three men decided to fly to the moon on clouds. But before they could enter the palace, they were stopped by the guards.

When they were turned away, Li Longji heard fairies singing a lovely and moving song.

Thanks to his musical ear, he memorised the melody until he got back to Earth, and started to compose a special song.

The song is said to be the famous Melody of White Feathers Garment. Have a listen in the video below.