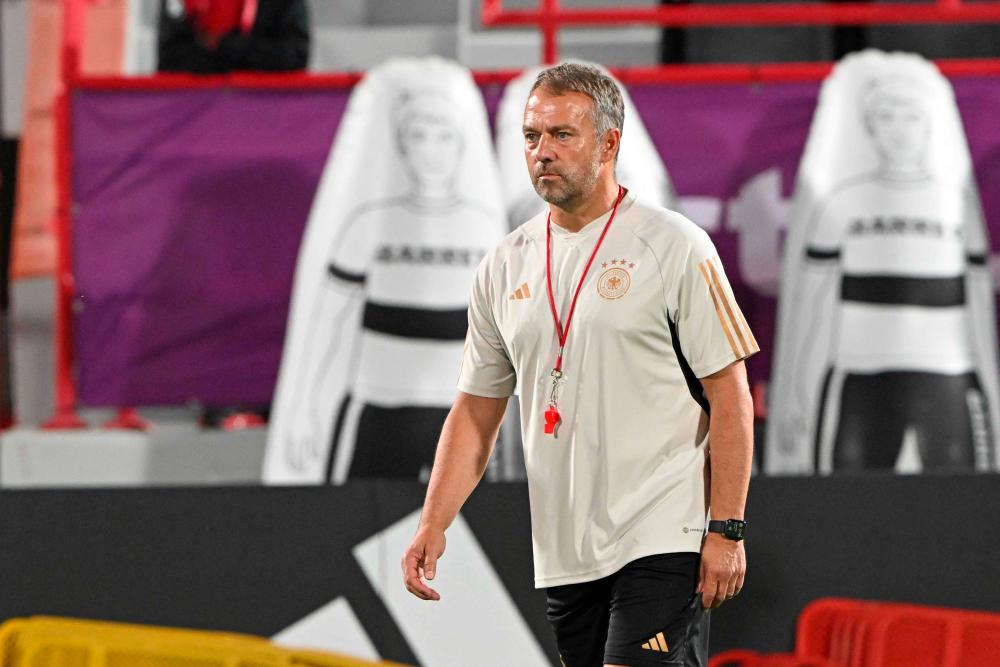 Germany’s coach Hans-Dieter Flick leads a training session at the Al Shamal Stadium in Al Shamal, north of Doha on November 30, 2022, on the eve of the Qatar 2022 World Cup football match between Costa Rica and Germany/AFPPix

DOHA: Germany will battle to avoid the humiliation of another first-round exit at the World Cup on Thursday while Belgium’s “golden generation” are fighting for their lives against Croatia.

Despite being holders, Germany were eliminated at the group stage four years ago in Russia and they are desperate to avoid a repeat when they play Costa Rica in Group E.

The Germans suffered a stunning opening defeat to Japan but salvaged a draw with Spain in their next game.

Germany must beat Costa Rica to stand a chance of progressing, and even then goal difference could still be a factor.

Costa Rica began their campaign on the wrong end of a 7-0 defeat to Spain but they proved their mettle with a subsequent 1-0 win over Japan and are still in contention to qualify.

Germany coach Hansi Flick laughed off suggestions he would lose his job if his side crashed out.

“You never know what’s around the corner but I am looking forward to Germany’s home European Championship (in 2024),“ he said.

Spain are not yet assured of their place in the last 16 -- a loss to Japan would put the Japanese through and could allow Germany or Costa Rica to overtake them.

Belgium would crash out of the tournament if they lose to Croatia, snuffing out the hopes of ageing players including Kevin De Bruyne, Eden Hazard and Thibaut Courtois in what is surely their last World Cup.

Roberto Martinez’s team have failed to convince so far in Qatar, narrowly beating Canada in their opener before losing to Morocco in their second match and there have been reports of rows in the camp.

A win over Croatia would give Belgium a place in the last 16 but a draw would leave them needing pointless Canada to beat Morocco elsewhere in Group F, with goal difference deciding who progresses.

Playmaker De Bruyne has looked off-colour so far, while injury has restricted striker Romelu Lukaku to a single substitute appearance.

Michy Batshuayi has scored Belgium’s only goal and they will need to find a new gear against Croatia, who recovered from conceding an early goal to thrash Canada 4-1 in their last game.

“It’s true we didn’t play so well in the first two matches but we’re not in crisis mode like some people are saying in the press.”

Croatia will look to take another step towards a potential second straight final appearance, while Morocco will be aiming to qualify for the last 16 for the first time since 1986.

A four-way battle for last-16 places in Group C between Argentina, Mexico, Poland and Saudi Arabia went down to the wire.

While Argentina moved into first place in the standings after taking a 2-0 lead against Poland, the identity of the team joining them in the knockout rounds was in the balance until deep into injury time in Mexico’s 2-1 win over Saudi Arabia.

A third Mexico goal would have been enough to take them into the last 16. Instead it was Poland who squeezed through thanks to a marginally superior goal difference.

Argentina will now face Australia in the last 16 after the Socceroos confounded pre-tournament odds to defeat Denmark 1-0 and claim the runners-up spot in Group D.

France, who were already virtually assured of first place in the standings, were beaten 1-0 by Tunisia after coach Didier Deschamps opted to rest most of his first-choice line-up.

Australia say they will put their bodies on the line to stop Lionel Messi and Argentina on Saturday.