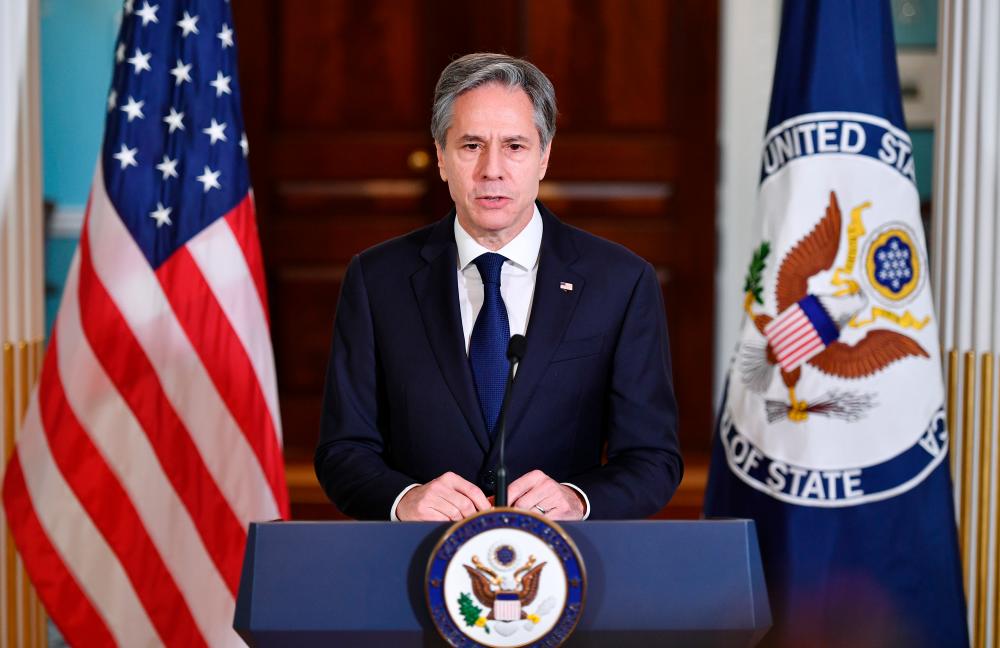 US Secretary of State Antony Blinken speaks on the death of former secretary of state Colin Powell in the Treaty Room of the State Department in Washington, D.C., U.S. October 18, 2021. Mandel Ngan/Pool via REUTERSpix

WASHINGTON: US Secretary of State Antony Blinken (pix) heads Tuesday to Ecuador and Colombia in a bid to support and broaden ties with Latin America’s democracies, amid a new spike in tension with Venezuela.

In both Ecuador and Colombia, Blinken will meet right-leaning elected leaders, part of President Joe Biden’s push of promoting democracy but also keeping up the pressure against leftist strongmen in Latin America.

Blinken “will highlight how specifically countries like Ecuador and Colombia have been able to build on their democratic values and commitment to benefit their peoples,“ said Brian Nichols, the top US diplomat for Latin America.

Blinken arrives Tuesday in Quito where he will meet President Guillermo Lasso, a banker who was the surprise winner in elections earlier this year.

“The immediate progress that President Lasso made in delivering Covid-19 vaccinations to the people of his nation in comparison with the administration that preceded him is a concrete example of what a transparent and democratic government can achieve,“ Nichols told reporters.

Colombia is a longstanding ally of the United States and Biden has largely kept his predecessor Donald Trump’s support of President Ivan Duque, despite calls on Biden by progressives in his own Democratic Party to speak more forcefully against police brutality.

“It’s a big democracy trip for Secretary Blinken but it’s also a realignment of the relationship with democratic Latin America beyond the traditional issues that have dominated the conversation for many years,“ said Muni Jensen, a former Colombian diplomat who is now a senior advisor at the Albright Stonebridge Group in Washington.

Colombia has pleased the Biden administration by adopting some of Latin America’s most ambitious targets on climate change ahead of next month’s high-stakes UN summit on climate, while Ecuador is especially sensitive as home of the Galapagos.

In Bogota, officials said Blinken would meet with ministers from around the region on a humane migration policy amid a spike of desperate Haitians seeking to make the long trek to the United States from Colombia.

Kevin Whitaker, who was the US ambassador to Colombia from 2014 to 2019, said that a strong message from Blinken on democracy — and on issues broader than just security cooperation — could have a significant impact at a time that growing US competitor China is making inroads in Latin America.

The Trump era and the January 6 assault on the Capitol by his supporters “served to discredit the model of American democracy for certain elites,“ he said, on “what they always believed the United States would represent in the region.”

Biden’s worldwide push for democracy and away from Trump’s embrace of autocrats has proved subtle in Latin America.

Seeking progress on climate, the Biden administration has stepped up talks with Latin America’s most populous nation Brazil, whose far-right president, Jair Bolsonaro, has mused about rejecting next year’s election outcome.

Biden has also kept up the pressure on autocratic leftist leaders in Venezuela, Cuba and Nicaragua, after Trump’s hard line was seen as paying political dividends in the key state of Florida.

Blinken’s trip comes days after the West African nation of Cape Verde extradited to Miami one of Venezuelan leader Nicolas Maduro’s close aides, Alex Saab, who is accused of siphoning millions of dollars meant for food aid in a country mired by dire poverty.

Venezuela is likely to come up with Duque, a staunch critic of Maduro whom he accuses of promoting drug trafficking and harboring armed Colombian rebels.

Whitaker, the former ambassador, said that Maduro was showing his motivations.

“The Venezuelans were looking for a way to get out of these discussions. They found it and they latched on to it. It doesn’t seem any more complex than that,“ he said. — AFP